Albert Francis Mando (1846-1912) appears to have lived in Lansingburgh from about 1856 to 1868, according to the city directories boarding at “Hoosick [113th Street] c. Whipple ave. [Fifth Avenue] Lans.” Other members of his family remained in Lansingburgh for longer; his mother Katherine “Kate,” for example on the 1880 US Census in Lansingburgh was at 504 Whipple Avenue. If the numbering remains the same as today, that would have been a house at the northeast corner of 113th Street and Fifth Avenue, what is now just a fenced yard for 506 Fifth Avenue. Albert Mando would occasionally return to Lansingburgh to visit. 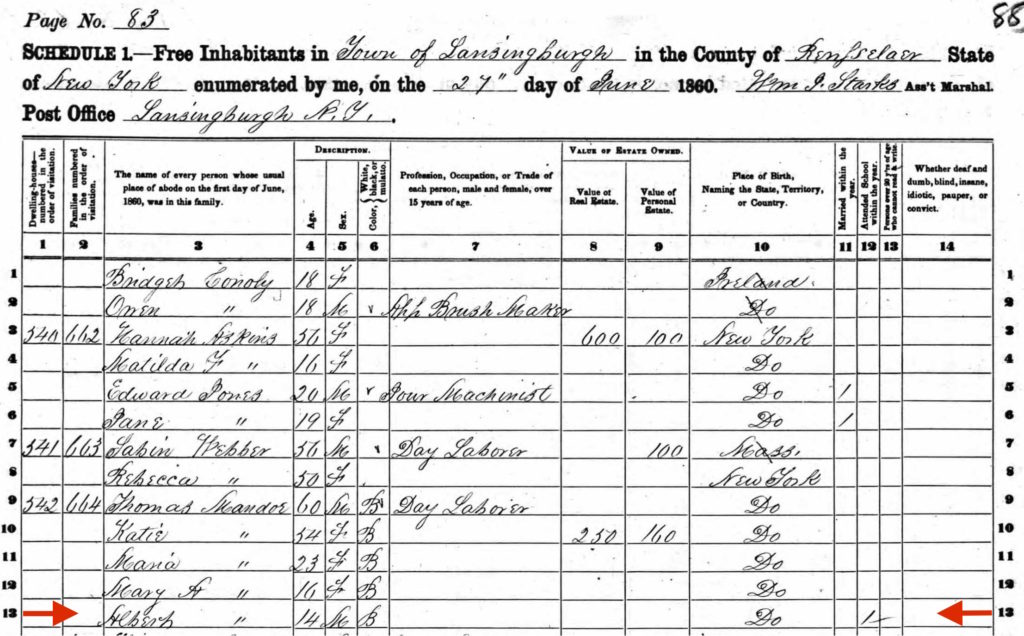 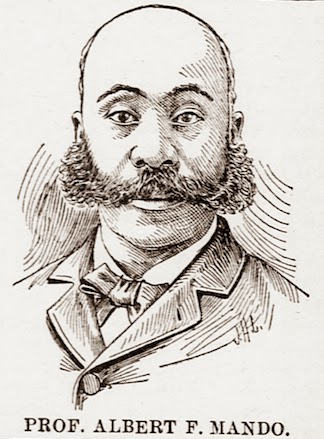 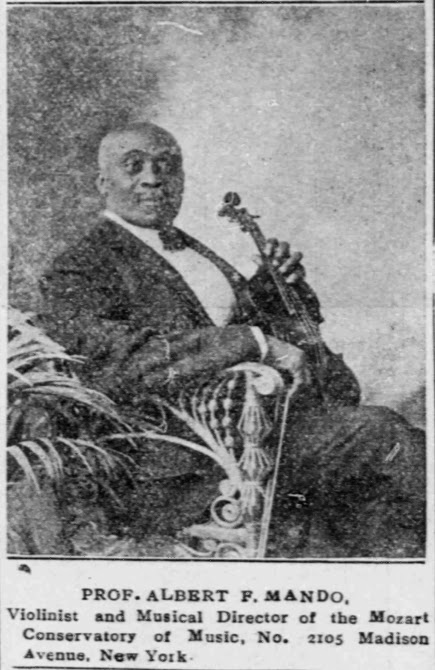 The Mozart Conservatory of Music.
There is probably no institution in this country which is more worthy of honorable mention than the Mozart Conservatory of Music located at No. 2105 Madison Avenue, New York city. It is both artistically and financially a success and deserves as it has received the gracious patronage of the good people of the metropolis and many nearby cities. It is, as its name imports distinctly a college of music, where science is taught with absolute thoroughness and by instructors the most competent to be had. It is believed to be the only conservatory of music of such standing and dignity in the country organized and controlled by a number of our race. Its organizer was Prof. Albert F. Mando, and he continues to be its director. Prof. Mando is a skillful and an educated musician with an artistic soul and high ideals. He has infused his own ceaseless energy and enthusiasm into the college and its success is his reward and his pride.
For many years the professor has also been identified with the interpretation of classical and popular music and his motto has been study, practice and progression. The New York Standard Concert Orchestra, composed of colored musicians exclusively which is in constant demand in various sections of the country and whose high standing is due first to the thorough musical education imparted to the members largely by the professor himself, and next to the maintenance of an elevated tone in the character of music to be rendered in both their public functions and their private rehearsals.
The orchestra visited Washington and number of years ago and under the direction of Prof. Mando delighted the audiences with the precision, high character and tasteful execution of the music submitted at their recitals, and this city with all the many brilliant meteoric attractions which have flashed across our artistic atmosphere has failed to find the equal of Prof. Mando’s combination of artists. Prof. Mando is in the prime of a useful, manly and highly pitched life. His very domestic atmosphere is saturated with the soulful flavor of music in its highest forms. Such men’s lives are heart throbs: they really live while other sodden souls merely exist in the equation of life.
From a number of programs of musical pictures, at all of which Prof. Mando has been the presiding genius and often the primal interpreter, there are noted Beethoven’s symphonies, Nos. 1, 2, 3, 4, 5 and 7; Rhodes’ Concerto, opus 9; J. B. Vrotto’s Concerto, opus No. 29, and Litze’s Rhapsody, opus 2, as well as sonatas and overtures from Mozart, Donizetti, Mendelsohn and Rossini.
“A Noted Musician; The Greatest Conductor of the Negro Race.” The Colored American [Washington, DC]. March 28, 1903: 2 col 3. 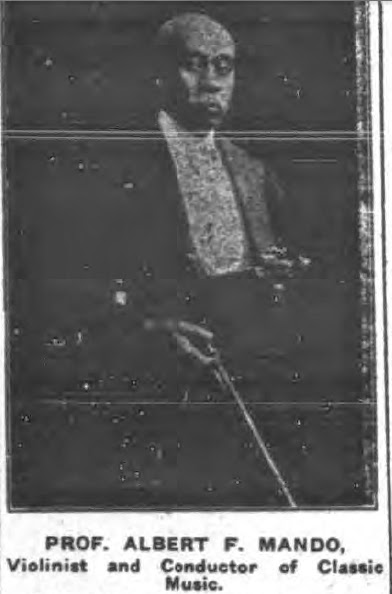 Prof. Albert F. Mando, director of the New York Mozart Conservatory of Music, is the only Afro-American to be honored with an honorary membership in ‘The Societe Universalle Lyrique’ of Paris, Milan, Berlin and New York. The honorary membership includes five illustrative and descriptive books on standard operas of the German, French and Italian schools valued at $150 and free admission to all musical lectures on all the operas during the season in this and the countries mentioned.
“Race Gleanings.” The Recorder [Indianapolis, IN]. May 31, 1902: 1 col 1.

Albert F. Mando, director of the Mando-Mozart Conservatory of Music at 2195 Madison Avenue, New York, died Friday at his home in that city. Mr. Mando was the most distinguished negro teacher and leader of music in the United States. At his conservatory he taught piano, organ, violin, violoncello, vocal and orchestral music and other forms of the musical art. He was the conductor of the Conservatory Sextette and Concert Orchestra. Professor Mando was born in Lansingburgh, and he made annual visits to this city to visit relatives and numerous friends. He possessed many excellent qualities and his career, in which he by his own efforts attained prominence, is worthy of praise.
“Obituary.” Troy Daily Times. October 15, 1912: 5 col 7.

Mrs. J.E.S. Williams of this city has been engaged to sing at the memorial service for the late Prof. Albert D. Mando, formerly of this city, at St. James’ Presbyterian Church, New York city, this evening. The Mozart Symphony Orchestra will assist. Addresses will be made by the pastor, Rev. Mr. Lawton, Bishop Alexander Walters and Rev. Dr. MacMullen.
“A Memorial Service.” Troy Daily Times. November 27, 1912: 3 col 2.

At the (sadly, largely overgrown!) Methodist Church Cemetery in Schaghticoke Hill there are several Mando interments:

Albert F. Mando b. 1846 (no date of death was transcribed – and seemingly one was never added)