James K. P. Pine’s Enterprise—A Boon to Lansingburgh.
Mr. James K. P. Pine has purchased from the Judson estate the five lots lying at the southeast corner of State and Clinton streets. Consideration $4,000. On his new purchase Mr. Pine will erect at once a mammoth brick structure to be used as a shirt, collar and cuff manufactory and laundry. The industry will give employment to about 300 operatives. It is his intention to lay a pipe to the river for the purpose of procuring a supply of water from that source. And if the village does not build a sewer to the river, as it doubtless will, Mr. Pine will construct one himself for the purpose of drainage. he has also purchased the river lot at the southeast corner of Clinton and River streets, which he will occupy at an early day in the prosecution of his business. He will build a dock in front of this lot in connection with a village dock that is to be constructed at the foot of Clinton street. The Troy carriage works will also be removed to State and Clinton streets as soon as the necessary accommodation is completed. These industries will prove a precious boon to Lansingburgh and the village will display good judgment in extending all the accommodations possible. A few manufacturers with the enterprise and push of Mr. Pine would speedily change our humdrum town into one of the liveliest villages in the state. Therefore we say again, to our authorities, render every manufacturer that comes all the aid and encouragement possible.
Lansingburgh Courier. February 23, 1884: 3 col 3.

—Fred Anderson has taken the contract for digging the cellar for J. K. P. Pine’s new building at State and Clinton streets. The contract price is $250. The cellar is to be 53 by 250 feet, and three feet in depth. The earth excavation is to be deposited in the new dock to be built by Mr. Pine near the foot of Clinton street.
“Village Notes.” Lansingburgh Courier. March 15, 1884: 3 col 2.

The J. K. P. Pine Building.
Nichols & Magill, of Troy, have secured the contract for doing the mason work on J. K. P. Pine’s building at State and Clinton streets. The carpenter work will be done by the day, Geo. C. Madden, of this village, furnishing the lumber. Work will be commenced at once and the structure will be completed with all practicable dispatch.
Lansingburgh Courier. March 22, 1884: 2 col 7.
Building and Improvements.
—James K. P. Pine broke ground for his shirt and collar manufactory at State and Clinton streets, Monday morning.
Lansingburgh Courier. March 29, 1884: 2 col 2.

—M. F. Cummings has completed the plans for the new collar shop and carriage manufactory of J. K. P. Pine, to be erected on John street, Lansingburgh. The building will be fifty-three by 250 feet and four stories in height. There will be a cellar under the whole building. The structure will be of brick and the trimmings will be blue stone. The cornices will be of galvanized iron of unique design. The boilers used to furnish the power will be located in a separate building in the rear of the main edifice, and will also supply the factory with heat. Fire-escapes of the most improved kind will be placed upon the building. The edifice is designed for a collar and shirt shop, a laundry and a carriage factory. Seventy-two feet of the northern end, from cellar to top, will be occupied by the carriage shop, the next fifty feet will be used for the laundry, and the remainder will constitute the collar and shirt departments. There will be two elevators, one for the exclusive use of the carriage manufactory, and the other to connect directly with the laundry and collar shop. The building will be the largest in the village, and will be completed by fall. The ground for the foundation has already been broken.
Troy Daily Times. April 17, 1884: 2 col 4.

—J. K. P. Pine is building commodious coal sheds on his dock near the foot of Clinton street, so that coal for his new factory can be unloaded from the boats direct from the mines.
“Real Estate Notes.” Lansingburgh Courier. September 27, 1884: 4 col 3.

—The exhibition of the incandescent electric light plant will be in operation to-night. The lights will be of twenty-five candle power each, three to a block, and will be hung on Third avenue, between [One Hundred] Sixteenth and [One Hundred] Twenty-first streets. The power will be obtained from the Corliss engine in Pine’s collar factory, where the dynamo will be located.
“Notes About Town.” Lansingburgh Courier. June 22, 1889: 3 col 2.

—Pine’s collar factory shut down for three weeks. The laundry department is the only one in operation now.
“Notes About Town.” Lansingburgh Courier. July 27, 1889: 3 col 2. 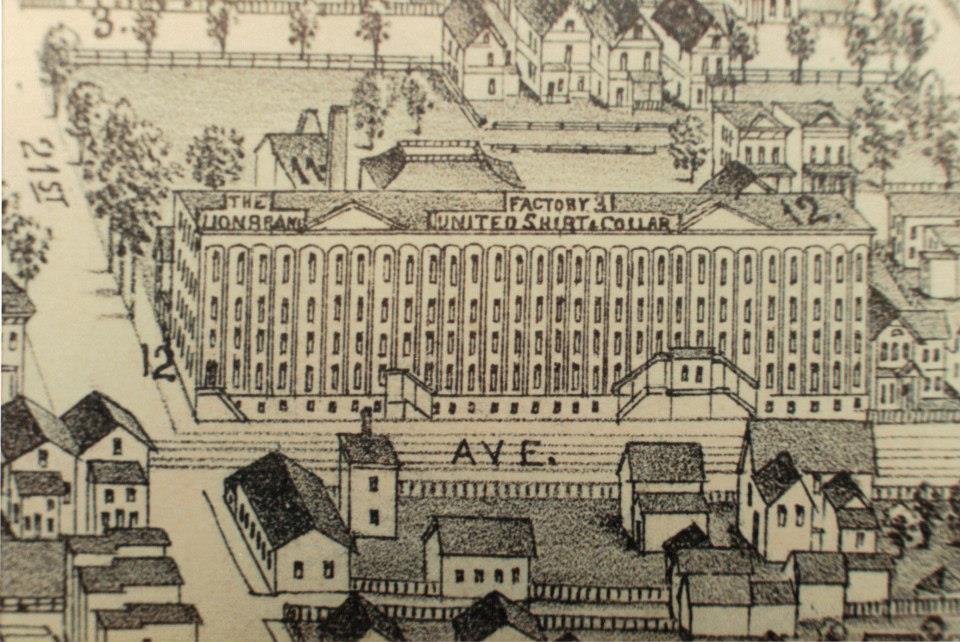 —The Lion factory, corner of Second avenue and [One Hundred] Twentieth street, will be enlarged by adding two stories, which will be used for storage. The rooms now used for storage will be converted into workrooms. There is a business revival in this department, and the demands of business have made the extension necessary.
“Lansingburgh.” Troy Daily Times. June 17, 1895: 2 col 4.

An Addition to a Collar Factory.
The United shirt and collar company has commenced to break ground for the erection of an addition to the company’s Lion factory in Lansingburgh. The addition will be the same height as the present building, four stories, and will be 150 feet front. The building will be used mainly as a stock room. Edward O. House, secretary of the United shirt and collar company, said to-day that the company had no intention of abandoning the River street factory in this city, but would continue work as heretofore. The new structure will be ready for occupancy about October 1.
Troy Daily Times. July 31, 1895: 3 col 3.

—The new fire escapes on the Lion factory have been erected and are being brightened by a coat of red paint.
“Lansingburgh.” Troy Daily Times. April 23, 1896: 4 col 2.

About the Shade Trees.
Several trees in front of the Lion collar factory were cut down yesterday, and this calls to mind the condition of the shade trees throughout the village. Most of them, it appears, have existed a long time without feeling the pruning shears or saw. The trees are desirable for shade purposes and beautiful to look at, but when it comes to walking or driving in underbrush it would seem to be time to see that a few at least of the lower branches be cropped off. On Third avenue yesterday a lady not exceptionally tall was embarrassed by having the foliage of her hat securely caught in the overhanging branches, and any one who measures six feet must “duck” in places on many streets. In conversation on this point a resident called attention to the trouble experienced on Second avenue in dodging under awnings, many of which are hardly more than five feet from the walk. Nicely trimmed trees will improve the appearance of any street and raising the awnings a trifle on Second avenue would be appreciated by pedestrians.
“Lansingburgh.” Troy Daily Times. May 23, 1896: 4 col 2.
At a Collar Factory.
The water protection system at the Lion factory is nearly completed and will be ready for tests in about ten days. The cistern has a capacity of 1,000,000 gallons and is connected with three hydrants in rear of the building, each of which is adapted for two hose connections. Steam pumps with capacity of 1,000 gallons per minute provide the force. Thus provision is made for six streams in rear of the building, which can be thrown to the top of the structure.
The cistern is also connected with two new hydrants in front. These hydrants, too, are connected with the regular water main and can be used on either system. There have always been two hydrants in front of the factory, one at each corner, and thus in case of fire fourteen streams—eight from in front and six from the rear—can be thrown into the interior. There are smaller pumps which provide power for several small lines of hose. All the pumps can be set at work instantly, as the steam is supplied from the factory boilers.
The sprinkler system is complete and consists of automatic sprinklers located a few feet apart throughout the building. An indicator on the west side of the street shows whether the water is on or off. The water in the cistern is pumped from the river.
“Lansingburgh.” Troy Daily Times. August 2, 1896: 4 col 2.

—The Lion factory of the United Shirt and Collar Company has been equipped with a system of incandescent lights, which were used last evening for the first time.
“Lansingburgh.” Troy Daily Times. January 28, 1897: 4 col 3.

—J. K. P. Pine is making improvements to the Lion factory by building an addition to the main building on [One Hundred] Twenty-first street, which will extend to the alley between Second and Third avenues.
“Lansingburgh.” Troy Daily Times. October 18, 1899: 4 col 2. 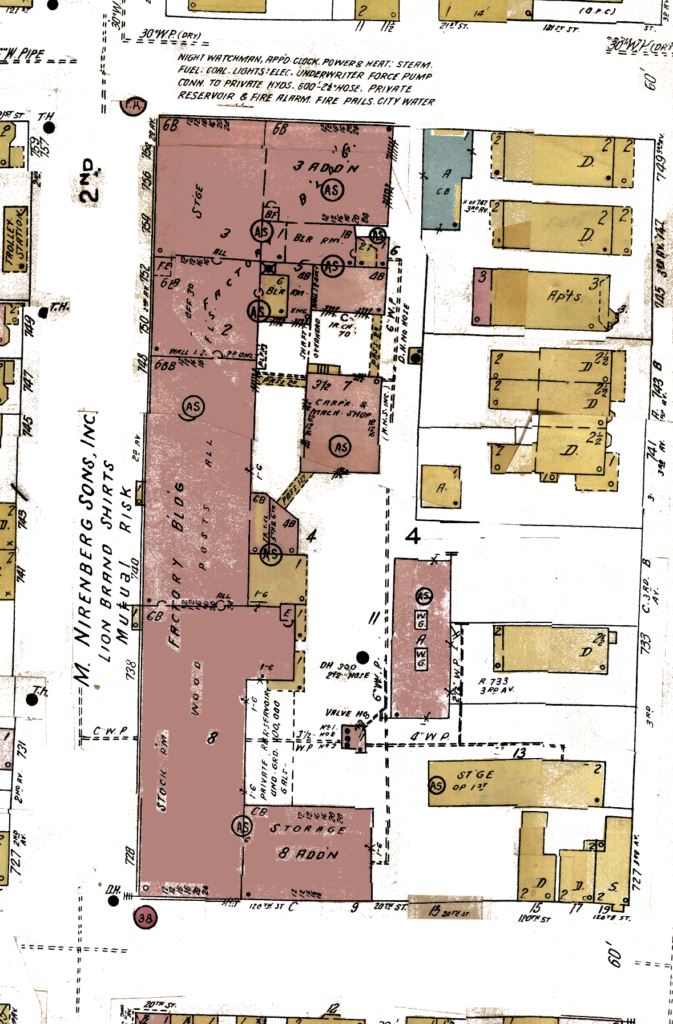 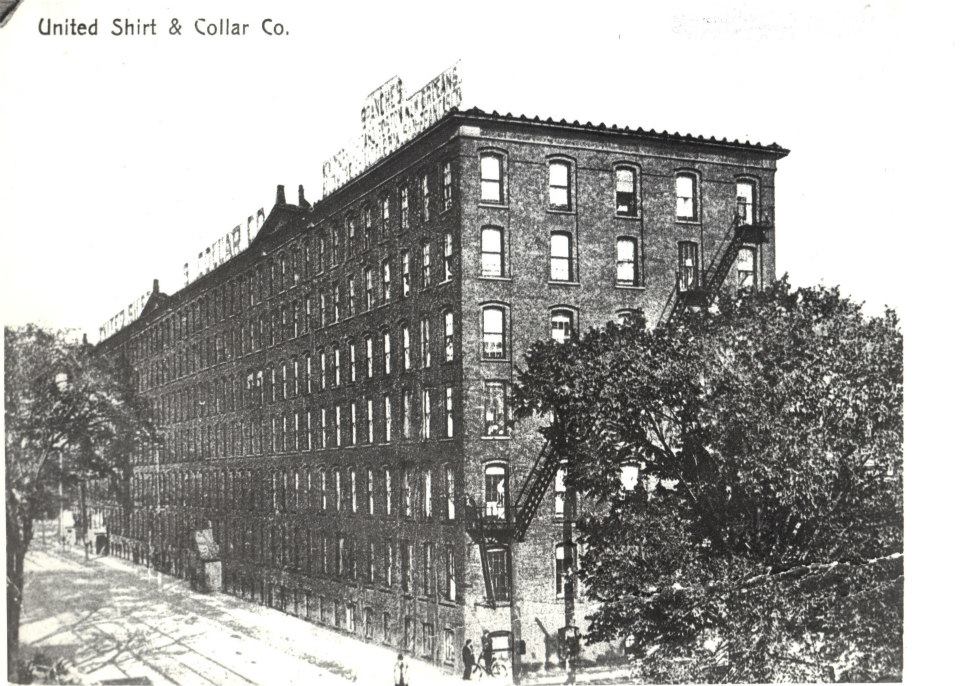 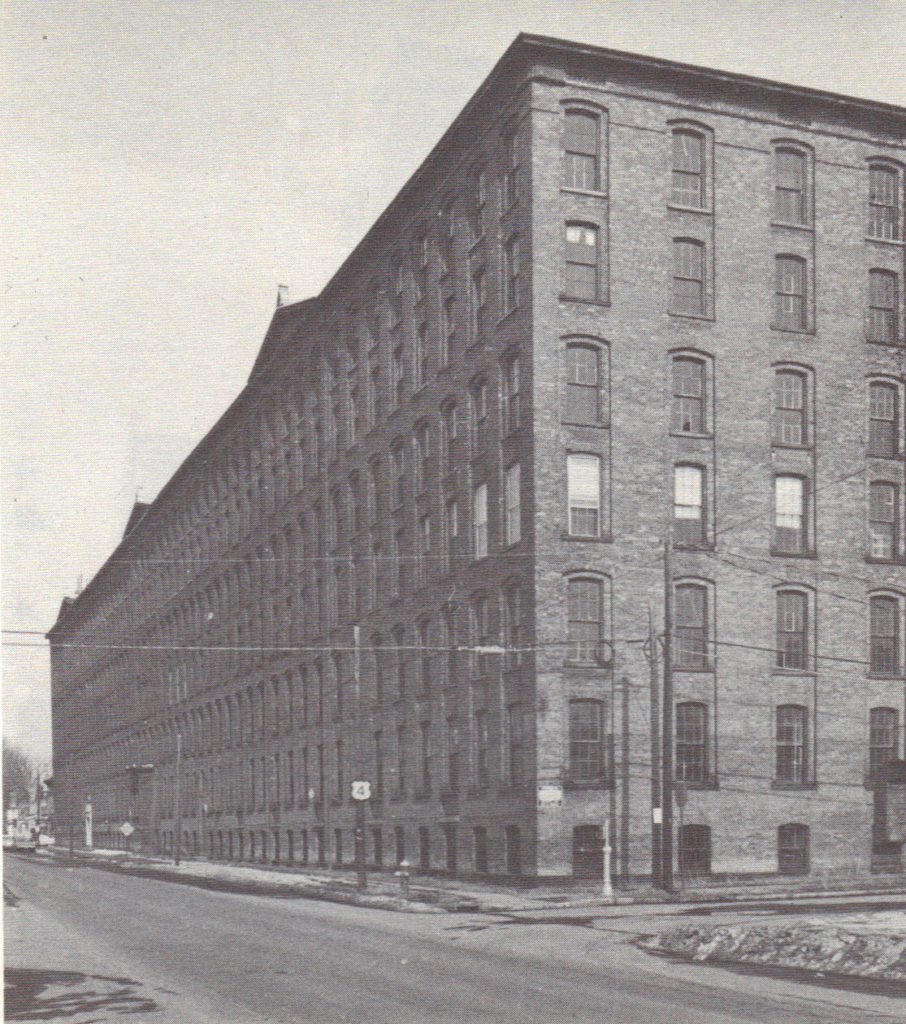 Lion Factory of the James K. P. Pine Co.
Second Avenue between 120th and 121st Streets
One of the world’s largest shirt and collar shops, the Lion factory was constructed in several stages between 1884 and 1897 by James K. P. Pine, an outstanding figure in Troy’s collar industry. Pine began in 1862 as a partner in the firm of Cole, Dyer and Pine and was subsequently a partner in several firms before 1880 when he founded the James K. P. Pine Company. In 1890, he consolidated five firms to form the United Shirt and Collar Company, which operated until 1922, three years after his death. The Lion factory is five stories in height and occupies an entire city block. It is still used for manufacturing purposes.
Waite, John G. The Architecture of Lansingburgh, New York. Lansingburgh, NY: Lansingburgh Historical Society, 1976.