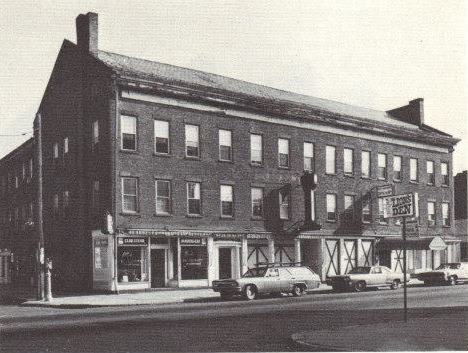 PHOENIX HOTEL
Second Avenue and 116th Street
This corner location has been the site of an inn or hotel since at least 1780. In 1834 a disastrous fire destroyed Van Buskirk’s Hotel, the first inn on the site. The construction of the present brick hotel was begun almost immediately by Esek Hawkins. The Phoenix continued the long tradition of its predecessor as a center of the social, political and commercial life of Lansingburgh. In December [sic], 1857, the hotel was damaged by another serious fire. However, it was rebuilt by April [sic?] of the following year by Benjamin Peets, the proprietor. An addition to the hotel was constructed along 116th Street in 1864 by Zebina E. Fobes of Troy, whose firm, Fobes & Co., was listed as architects and contractors. Over the years, the Phoenix has hosted many famous people, including Henry Clay. Today the Phoenix is one of Lansingburgh’s most venerable landmarks. Because of its close connection with the development of the community, much of the social and political history of Lansingburgh is reflected in the bricks and timbers of the Phoenix Hotel.
Waite, John G. The Architecture of Lansingburgh, New York. Lansingburgh, NY: Lansingburgh Historical Society, 1976.

NOTICE is hereby given to the Stockholders of the Junction Canal Co., that an Election for the purpose of choosing Directors of said Company, will be held on the 22d day of November next, at 10 o’clock in the forenoon of that day, at the House kept by M. S. Van Buskirk.
By order of the President and Directors of said Company.
Lansingburgh, Oct. 27, 1832.
E. W. WALBRIDGE, Secretary.
Lansingburgh Gazette. November 27, 1832: 3 col 3.

We would call attention to the advertisement of Mr. Shaw, for a grand Vocal Concert at the Phoenix Hotel, to-morrow evening. To those who are acquainted with Mr. Shaw, he needs no recommend at our hands. He always does just what he says he will, and on this occasion we think he will do a little more. All we have to say is that if you want good seats, go early.
Lansingburgh Democrat. February 7, 1844: 2 col 2.

NOTICE.—The Members of Fire company No. 2, are requested to meet at the Phoenix Hotel on Friday evening next, to transact business of importance.
WM. BUNNEL, Foreman.
Wm. Cowper, Secretary.
Lansingburgh Democrat. June 12, 1844: 2 col 6.

B. PEETS, of Albany has purchased the Phoenix Hotel, and takes possession the first of May next.
Lansingburgh Democrat. February 12, 1857: 2 col 4.

Lansingburgh Phœnix Hotel.
BEN. PEETS, late of Albany, having purchased, repaired and newly furnished this pleasure Hotel, (long kept by C. COTTRELL,) proposes to kept it himself, in first-rate style, for citizens of this and neighboring Counties, for families, travelers and parties, who will find every wish promptly supplied, at reasonable rates.
☞ Good yard and shed for farmers. Give him a call. August, 1857.
Lansingburgh Democrat. August 6, 1857: 3 col 1.
Destructive Fire.
—
The Phoenix Hotel In Ruins.
—
About 2 o’clock this morning a fire broke out in the Phoenix Hotel in this village, which before it was subdued destroyed all the building above the third floor, while the lower part was completely ruined by the water. The wall upon the south front part sagged over to the east, making the labors of the firemen very hazardous. They worked however with their accustomed promptness, and it was a matter of universal remark, that a fire was never better managed. The loss is probably from $10,000 to $15,000—there was an insurance of $5,000 on building, and $1500 on furniture. The insurance on the furniture was procured by Mrs. Peets unbeknown to her husband, who was not aware of the fact until the time of the fire, he having declined to get it insured on the ground that he had already paid out so much money for insurance. The Phoenix was owned by Mr. Benjamin Peets.
The fire originated in the front room, south of the ball-room, but how, or from what cause is not known.
A gold watch and fob was found at the fire this morning which the owner can obtain by calling upon Mr. Archibald Kirkpatrick at Wing’s bake shop.
Lansingburgh Democrat. September 17, 1857: 2 col 5.

PHOENIX HOTEL.—The Company owning this popular hotel have commenced the erection of a large two story addition to the main building running on the south side of Elizabeth street to the alley. This extension will be made to increase the accommodations for boarders. It is to be completed by July next. Fobes and Co., of Troy are the Architects and contractors.
Semi-Weekly Chronicle [Lansingburgh, NY]. April 27, 1864: 3 col 1.