Henry Joseph Mason first appeared as a cabinet maker in Lansingburgh on the 1850 US Census.

H. J. Mason,
CABINET AND
COFFIN MAKER,
241 State Street, Lansingburgh, N. Y.,
Would respectfully inform his friends and the public generally, that he has added to his extensive Warerooms, all the stock lately in the Establishment of Charles A. Clark, consisting of various styles of COFFINS, TRIMMINGS, &c.
Metallic, Rosewood, Broadcloth,
AND COFFINS OF VARIOUS OTHER KINDS, CONSTANTLY ON HAND.
Shrouds, Habits, Caps, Plates,
and different descriptions of HANDLES.
A superior HEARSE, with glass sides, and Carriages furnished at short notice.
☞ Particular attention given to superintending funerals.
Orders attended to at all hours of the day or night, by applying at either the warerooms or his residence, next door South—1st building south of Phoenix Hotel.
Country orders filled with the best of satisfaction in one hour’s time. [may 11
Semi-Weekly Chronicle. May 11, 1864: 2 col 3.
Business Change.
Mr. Charles H. Mason, for some time past the efficient commercial traveler for Saxton & Thompson, flour dealers, Troy, has severed his connection with that firm to engage in business with his grandfather, Mr. Henry J. Mason, the well known furniture dealer and undertaker. He will act as accountant for the house and it is his intention to acquire a knowledge of the business in all its details. The young man has ample ability and all the qualifications necessary for a successful business career, and his hosts of ardent friends will wish him god-speed in his new enterprise.
Lansingburgh Courier. March 10, 1883: 2 col 3. 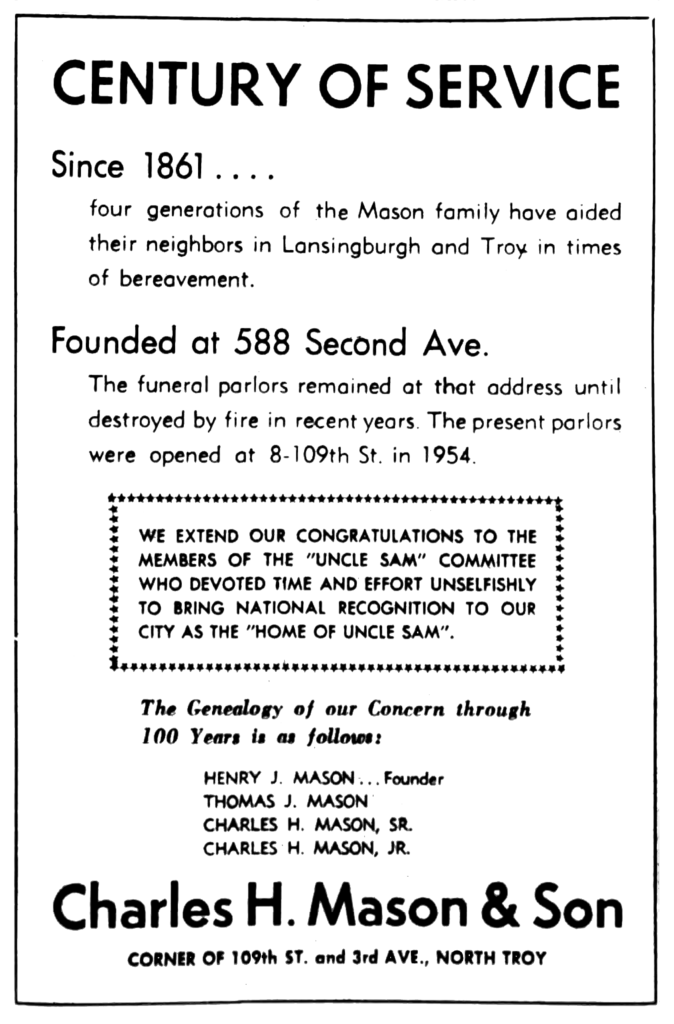