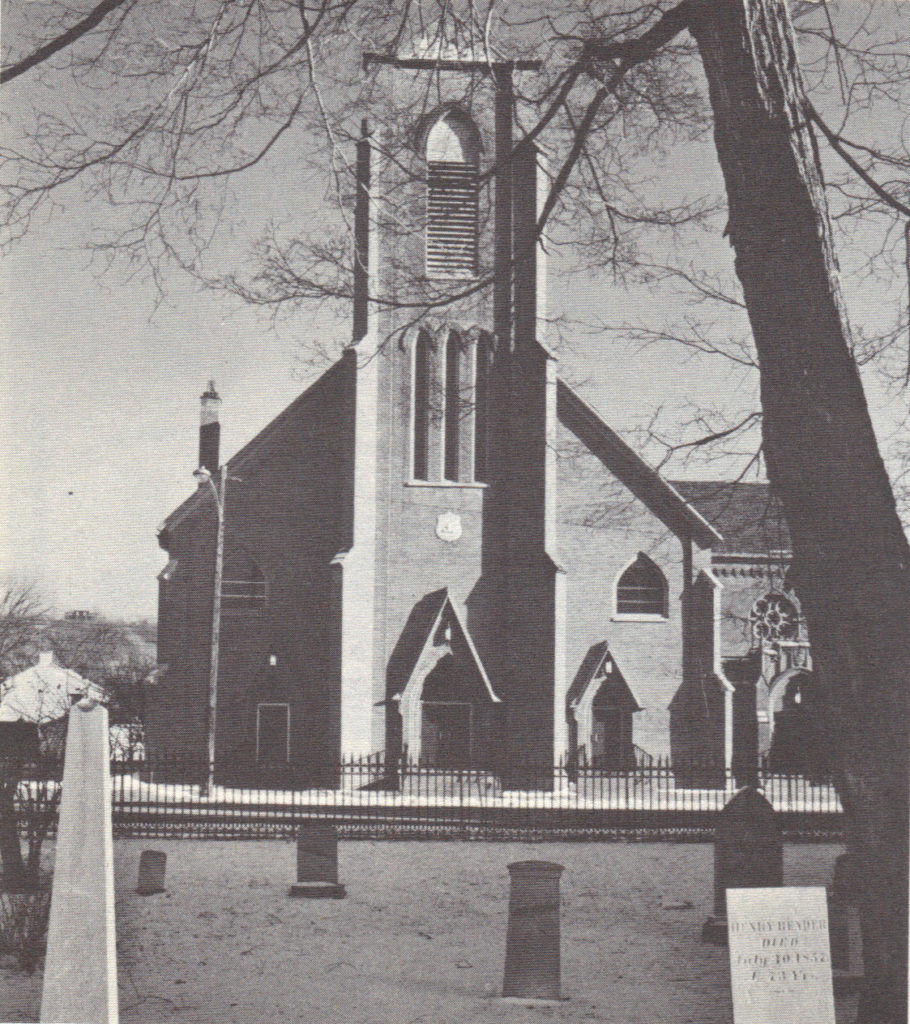 St. Augustine’s Church
580 Fourth Avenue
Although Lansingburgh was an early center of Roman Catholic activity in the upper Hudson valley and a Catholic burial ground was established in 1830, it wasn’t until 1844 when St. John’s Church was constructed that there was a Catholic church building in the village. St. Augustine’s Church was established in 1864 and the cornerstone of this building laid the same year. The first mass was celebrated in the new building in December, 1865. Designed in a gothic revival style and constructed of brick, the church cost $35,000 to build. Patrick Finerty was listed as both contractor and architect. In 1956, the appearance of the building was altered by the removal of the original steeple and part of the brick tower.
Waite, John G. The Architecture of Lansingburgh, New York. Lansingburgh, NY: Lansingburgh Historical Society, 1976.

☞ THE CORNER STONE of St. Augustine’s church, Lansingburgh, was laid with impressive ceremonies, in the presence of an immense auditory, yesterday afternoon. Service was held at St. John’s church, and a procession headed by girls clad in white, bearing a banner, marched to the site of the new edifice. Archibishop McCloskey, of Albamy, laid the corner-stone, assisted by Fathers Conroy, Theband, Keveny, Galbery, Collins and others, placing within a box several relics, publications, &c., after which the clergymen, in procession, walked around the walls. The Archibishop then ascended a platform that had been prepared, and delivered as address or sermon from the words of the Psalmist: “Unless the Lord fills the house, in vain is the work of the builders.” He described the meaning of the ceremonies that had been witnessed, and the future promise of the edifice which had thus been commenced. The Archbishop is a prelate of fine presence, and a powerful, eloquent, yet pleasing speaker. The weather for the occasion was auspicious, and the cars to this city were thronged all the afternoon.
Troy Daily Times. June 6, 1864: 3 col 4.

☞ CATHOLIC FAIR.—We are informed that the fair for the benefit of the new Catholic church, [St. Augustine’s] in this village, to which we referred last week, is to open on Tuesday evening next, [17th] and to continue every evening during the week. As we have had very few fairs of late years this will no doubt will be quite an event. Extensive preparations are being made by the lady members and friends of the congregation to render the occasion interesting as well as successful in a pecuniary point of view. The new church edifice which is nearly completed will be fitted up and each of the principal streets is to be represented by a table for the display and disposal of the valuables. Besides these there will be refreshment tables decked with delecacies to tempt the appetite. Our Catholic friends have shown zeal as well as taste in the erection of this new edifice which is an ornament to the village and therefore deserve to be encouraged. We hope therefore that the fair will be well attended.
Lansingburgh Weekly Chronicle. October 10, 1865: 3 col 3.

THE Catholic FAIr. Our citizens should not forget this fine entertainment which commences this [Tuesday] evening, and will continue every evening this week in the splendid new St. Augustine Church now nearly finished.
Lansingburgh Weekly Chronicle. October 17, 1865 3 col 4.

—The ceremony of the dedication of the new Catholic church, which will take place to-morrow, will be an impressive affair. Bishop Conroy, Rev. Dr. Moriarty and other clergymen from abroad will be present and take part in the exercises. The attendance will no doubt be large. The ceremonies will commence at 8 o’clock in the morning.
“Lansingburgh.” Troy Daily Times. May 5, 1866: 3 col 2.

☞ DEDICATION OF ST. AUGUSTINE’S CHURCH, LANSINGBURGH.—The new Catholic church just finished in Lansingburgh, was formally dedicated yesterday. Bishop Conroy, of Albany, Rev. Dr. Moriarty, of Philadelphia, and a number of clergymen from Troy, Albany, Cohoes and the Theological Seminary were present, and took part in the exercises, which were quite impressive. The edifice is a beautiful one—an ornament to the village. In its interior architectural appearance, it resembles St. Peter’s church in this city. Dr. Moriarty preached an eloquent discourse, taking for his text the 10th chapter gospel of St. John. The edifice was crowded. The Bishop administered the sacrament of confirmation to about one hundred and fifty children; also to the same number in Waterford in the afternoon.
Troy Daily Times. May 7, 1866: 3 col 4.

Lansingburgh and Vicinity.
—
☞ St. Augustine’s Church was dedicated on Sunday 6th inst. Right Rev. Dr. Conroy, officiated, attended by Clergymen from Albany, Troy, Philadelphia, and Lawrence city. The services commenced at 9 o’clock, and were conducted with a sacred solemnity which impressed the crowded assemblage in a most gratifying manner. Immediately after the Blessing of the Church, the members of the congregation had the pleasure to witness the administration of the Sacrament of Confirmation to their children numbering one hundred and sixty. High Mass was celebrated by the Very Rev. P. Stanton of Philadelphia, during which holy function the celebrant at the altar, and the members of the choir, harmonized perfectly with the sublime devotion so apparent throughout the sacred edifice. The sermon for the day was preached by Very Rev. Dr. Moriarty, and in a manner which afforded general satisfaction. As we have congratulated our catholic friends in Lansingburgh on the operation of their beautiful and perfect Church, we are now happy to congratulate them on the eminent success of the solemn opening of their admirable and revered place of worship. Every one acknowledged that a great enterprise had been undertaken, successfully carried out, and finally crowned in the joy of pious triumph. Memories traveled back to former days of lowliness and chilling depression, and then recoiled in feelings of gratitude and excitation. Indeed all present coincided with the preacher, who in a most felicitous way, adduced the occurrence of the day, as one of the continuous and innumerable exemplifications of the Savior’s promise viz, “You will sorrow but your sorrow will be turned into joy.” Dr. Moriarty paid a well deserved compliment to Rev. T. Galverry who has performed a work of religious and scientific value which would task the energies of the oldest and most favored laborers in a similar field. Also in a graceful strain, praise and [thanks?] were bestowed on the congregation who have contributed to effect that, which under the circumstances may be [called?] wonderful.
Lansingburgh Weekly Chronicle. May 8, 1866: 3 col 1.

—A new temperance society has been organized in Lansingburgh. The title is “St. Augustine Total Abstinence Society,” and is connected with the Catholic Church of that name.
Troy Daily Whig. August 14, 1866: col 2.