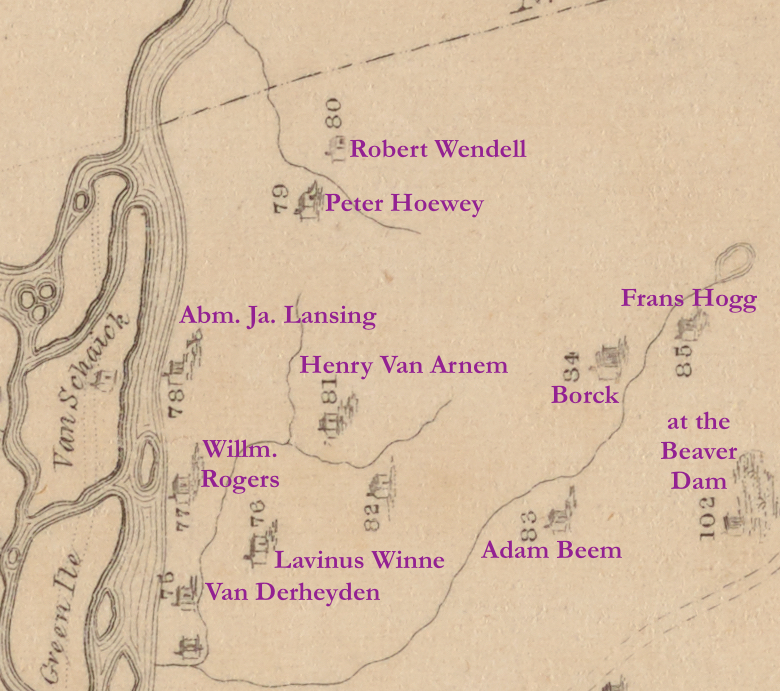 Detail from “A Map of the Manor Rensselaerwick” by John R. Bleecker, Surveyor 1767 showing Lansingburgh area from the Piscawenkill north to the Iserkill. 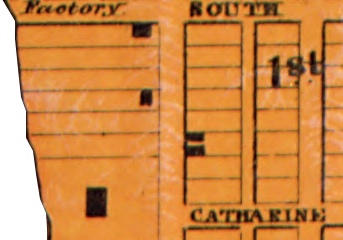 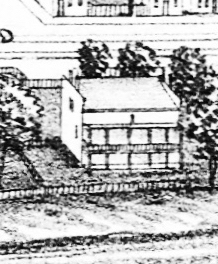 Old Lansing Homestead.
There are those who claim that the N. B. Powers house, standing just north of the site of the old oilcloth factory, is the oldest building in Lansingburgh to-day. It was at one time the Lansing homestead and occupied by Abraham J. Lansing, the founder of the village. It was built of brick brought over from Holland. There is an air of antiquity about the place in striking contrast to the modern surroundings.
Troy Times. May 30, 1914: 6 col 3.

The WENDELL-LANSING HOUSE (private), 405 Second Ave., was built about 1750 in the early Georgian Colonial style. The white two-story superstructure is of Holland brick; the foundations are of cut stone, with a riverside wall more than three feet thick, probably to withstand ice floes brought down by freshets. The interior has been modernized.
Workers of the Writers’ Program of the Works Progress Administration. New York: A Guide to the Empire State. New York State Historical Association, 1940. 352.

Lansing Homestead
Editor The Record: Recently I received the news that the Lansing homestead at 405 2nd Ave., has been bought by commercial interests who plan to demolish the house and erect a supermarket on the site. The main argument in favor of this seems to be that the property adjoins business property now. I might point out that this is true of all commercial areas—that they adjoin an area of some other use, usually residential.
My main reason for writing is to let you know that members of the Lansing family, descended from the original owner, are still interested in what happens to the house. Since the original owner, Abraham Jacob Lansing, founded Lansingburgh and was active in the development of Troy as the county seat, the house is a part of the historic heritage of Troy.
It is ironic that many Americans make a trip to Europe to see and admire historic buildings that have somehow survived the destruction of two world wars, while here at home the destruction of historic buildings is shrugged off as being unimportant. I do not advocate saving anything and everything simply because of being old. In this case, I am making the plea that this house be saved. The Lansing house is neither as large nor as fine a place as Fort Crailo, but it is one of the very few remaining homesteads of the Hudson River valley.
JOHN LANSING
Detroit.
“Pulse of the People.” Times Record. September 20, 1961: 14.
Want Lansing House Preserved
The board of trustees of the Rensselaer County Historical Society has gone on record as “hoping that the Lansing House located at 405 2nd Ave., the oldest house in Troy, may be preserved.”
Action was taken at a recent meeting of the board. Bruce W. Hislop, president of the society has written Frank E. Popp, president of the Troy Common Council of the action.
Mr. Hislop said that the board of trustees directed him to advise Mr. Popp as president of the Common Council that it is one of the purposes of the soiciety to preserve historical sites in Rensselaer County and the society wishes to record that it hopes the Lansing House will be preserved.
On Sept. 6, the New York State Historian sent a letter to the Common Council in which the same feeling was expressed.
Times Record. September 25, 1961: 15 col 5.

Mr. Manupella spoke in regard to the proposed re-zoning of the 16th Ward. He said that the home of Abraham Jacob Lansing on 2nd avenue should be preserved and not destroyed.
“Manupella Installed by Democrats.” Times Record. September 26, 1961: 13 col 4.

“I know the time, just give me the words and I’ll sing it,” J. Lee Quigley of Troy said some years ago to his friend Harry Hawley. […]
One of his recent involvements is serving as chairman of the committee to restore the Herman Melville home in Lansingburgh.
He is also an historic home “buff.”
“One of the saddest things in the city was the demolition of the Lansing home back in the 1960s,” he said.
Stanley, Marie. “Involved Means ‘Loving People,’ Says Leo Quigley.” Times Record. January 4, 1973: 5.