In large letters on the cornice will appear the worlds “Literature,” “History,” “Science” and “Mathematics” and over the main entrance, leading from Fifth Avenue, will be “Lansingburgh High School, Erected MCMX.” Busts of Washington and Lincoln will also ornament the front of the building.
“Plans for New High School.” Troy Times. July 14, 1910: 6 col 2. 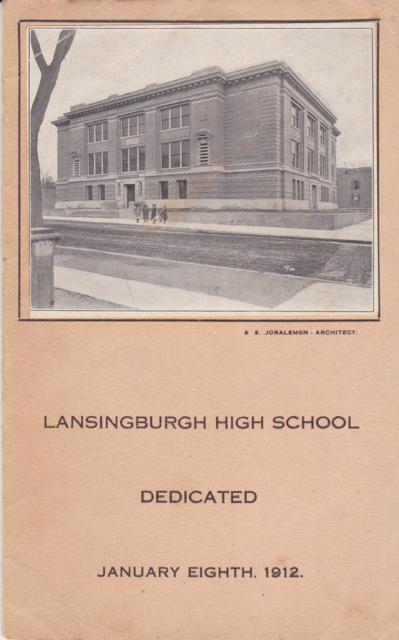 For whatever reason, the busts that would ultimately be displayed on the front of the high school (now the Lansingburgh Central School) at 576 Fifth Avenue would prove to be of two different men. Most Burghers would eventually forget who those busts represented (or at any rate, when former LHS Trustee Kay DeRosa asked people online, nobody could recall!).

A photo of the High School without the busts, pasted onto the 1912 dedication program, was reused on the 1912 and 1913 Odyssey yearbooks. A photo showing two busts appeared within the 1918 Odyssey. Given the United States’ entry into World War I in April 1917, it would’ve been unlikely if anyone would have gone to the expense of placing busts between then and 1918. Possibly it was done between 1914 and 1916, inclusive. 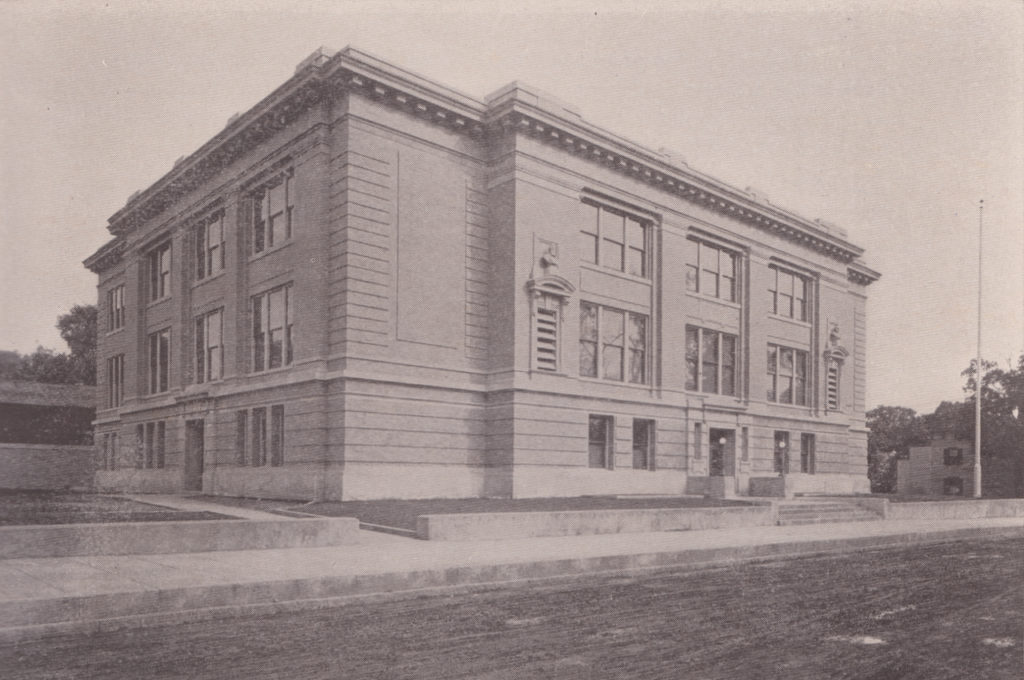 Photo of Lansingburgh High School with busts from the 1918 Odyssey yearbook.

Watervliet’s High School had chosen two busts during that same time frame (1914-1916) in which Lansingburgh might have done so:

Senior Class Memorial.
A committee, of which Robert Weldon is Chairman, has purchased for the senior class its memorial to the High School, beautiful busts of Longfellow and Shakespeare. Miss Marion Coates will make the presentation speech at the Class Day exercises June 21.
“Watervliet.” Troy Times. June 8, 1915: 3 col 1. 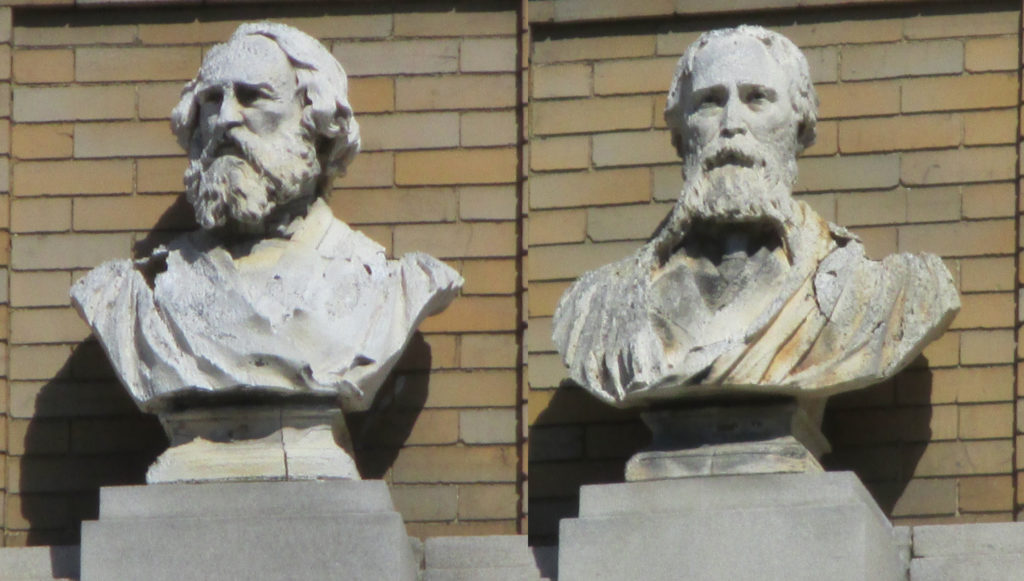 Busts on front of Lansingburgh Central School, cropped from photos by Kay DeRosa.

The poet Longfellow, even if he might not be recognized by likeness, is probably still remembered by many for at least “Paul Revere’s Ride,” beginning:

Listen, my children, and you shall hear
Of the midnight ride of Paul Revere,

While probably not something the school had in mind with respect to the bust, Longfellow had read Herman Melville’s first novel Typee, written in Lansingburgh:

[July 29, 1846] In the evening we finished the first volume of Typee [by Herman Melville], a curious and interesting book with glowing descriptions of life in the Marquesas.
Longfellow, Samuel, ed. Life of Henry Wadsworth Longfellow with Extracts from His Journals and Correspondence. Vol 2. Boston, MA: Ticknor & Co., 1886. 52.

books are the bees which carry the quickening pollen from one to another mind.
Lowell, James Russell. Rev. of Kavanagh, a Tale, by Henry Wadsworth Longfellow. North American Review 69(144). July 1849.

Lowell was, like Longfellow, part of a group called the “Fireside Poets.” He was also a member of Longfellow’s “Dante Club.” While less likely to be remembered by the average person today, the NAACP’s magazine of 1910-present, The Crisis, took its name from Lowell’s 1844 poem “The Present Crisis.” Like Longfellow, he was also familiar with Typee, punning on its title:

In later years, Lowell would reportedly be moved by Herman Melville’s “Norfolk Isle and the Chola Widow.” “Moved to tears,” editor Charles F. Briggs claimed in a letter to Melville.

Though both Longfellow and Lowell died in Cambridge, Massachusetts, the latter man did have a connection to the Capital District via his brother:

—Robert Trail Spence Lowell, D. D., who died Saturday at Schenectady, was the brother of the late James Russell Lowell. Dr. Lowell was born in Boston in 1816. He was graduated from Harvard in 1833 and took a full medical course there, but did not practice. In 1839, after having been engaged in mercantile pursuits, he began the study of theology. Upon the invitation of Bishop Spencer of Newfoundland he went to Bermuda and was made a deacon in December, 1842, and a priest in March, 1843. He went to Newfoundland in 1843, and was in charge at Bay Roberts until 1847, when he returned to the United States and began missionary work among the poorer people in Newark, N. J. He built a church in that city, and remained there until 1869, when he removed to Duanesburgh. He was in the latter place for ten years, and then was four years headmaster of St. Mark’s school, Southborough, Mass. In 1872 he became professor of the Latin language and literature at Union college, and held the position for six years. Dr. Lowell was an author of note.
“Obituary.” Troy Daily Times. September 14, 1891: 3 col 3.