Center Brunswick (however one wants to spell or order that name), around the intersection of the Grange Road, Hoosick Road, and Sweetmilk Creek Road, is the first population center that would have been reached from the eastern boundary of the Village of Lansingburgh (or Stone Arabia) via the Farrell Road (earlier called the Brunswick Road).

The private picnic ground or outdoor event venue in Centre Brunswick called Ensign’s Grove, mentioned in some items below, would seem to have been in the vicinity of the H. Ensign home that was on the 1854 Rensselaer County map. The Ensign home seems to correspond to where Placid Hills Stables is now at 196 Town Office Road, on the east side of that road. 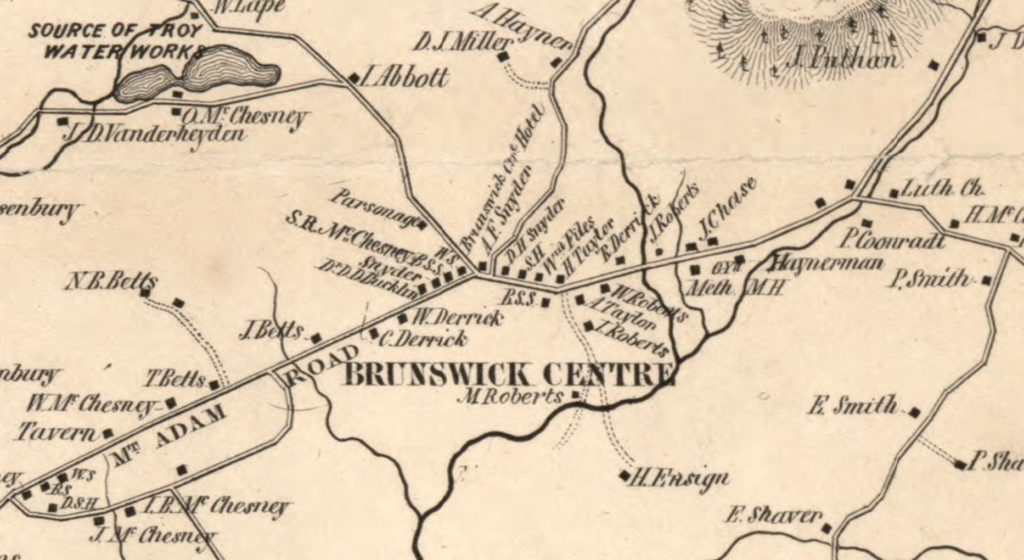 Image of Brunswick Centre cropped from 1854 Map of Rensselaer County

This hamlet is situated about the centre of the town of Brunswick, on the old Stone road. Sweet Milk creek runs through the place. Brunswick Center comprises a schoolhouse, a store and a small number of dwellings. The Gilead Evangelical Lutheran church is a short distance east of the place. A postoffice was established here a number of years ago.
Weise, A. J. History of the Seventeen Towns of Rensselaer County. Troy, NY: J. M. Francis & Tucker, 1880. 106.

Centre Brunswick, located north of the centre of the town, upon the “Stone road,” was the scene of considerable activity in the days of stages. In recent years it has become a quiet hamlet. The old Lutheran church is located just east of the hamlet.
Anderson, George Baker. Landmarks of Rensselaer County, New York. Syracuse, NY: D. Mason & Co., 1897. 527.

To the Editor of the Whig:
For getting up celebrations which involve food for mind within doors and food for body without, our friends in the country cannot be beaten. In the towns around Troy where the population is made up mostly of farmers, the Sabbath Schools, usually, are closed in the autumn and not re-opened till spring, and this closing time is a great affair. Thursday of last week three or four schools united in a celebration at the Lutheran Church, in Schaghticoke. After speeches from various gentlemen about 400 persons marched to a grove in which was a table most beautifully arranged and bountifully supplied. There was a similar celebration to-day at the Lutheran Church in Brunswick Centre on a larger scale, six schools and a collection of about 700 people being present. Addresses were made by Rev. Messrs. Curtiss of Schaghticoke, Warren of Brunswick, and Taylor of Lansingburgh, and then such a collation. It takes our farmer friends to do this. A boy’s capacity for cakes and candy is noted world over, but here everybody had to give up the battle, persuaded that it was impossible to exhaust the supplies. The quality of the refreshment was such as would have made the lips of old Epicurus himself smack with delight. Monter’s Band made the music and there was real melody in their rates. By the way, that Band is an honor to Troy, and the Trojans ought to see that it is well sustained. I noticed their music in church; it was not harsh, as is usually the case when brass instruments are used in houses, but soft and sweet. These festival gatherings are seasons of great delight and of much profit to those who participate in them, and both children and adults are made happier through the year for these sensible, sober, social and joyous occasions. Yours, T.
Wednesday, Oct. 8, 1851.
Troy Daily Whig. October 10, 1851: 2 col 3.

☞ UNION MASS MEETING.—A Union mass meeting will be held at Centre Brunswick, in Ensign’s grove, on Friday, the 23d inst., at 1 o’clock P. M. Ladies are invited to attend. Distinguished speakers will be present to address the meeting. RALLY ALL.
Troy Daily Times. September 20, 1864: 3 col 3.

Ladies’ Festival.
THE LADIES connected with the Lutheran Congregation in the town of Brunswick, will give a Festival in the beautiful grove of Mr. Henry Ensign, near Brunswick Centre, on THURSDAY Afternoon, June 29.
Strawberries, Raspberries and other fruit, Ice Cream, Iced Lemonade, and all other refreshments will be provided. The Choir of the Church will furnish some appropriate vocal and instrumental music.
The sale of refreshments will commence at 2 1/2 o’clock, and close at 8:00 P.M.—The proceeds will be used in purchasing furniture for the new church.
Should the weather prove unfavorable, the Festival will be given the next day. je17*w2t-d1t
Troy Daily Times. June 28, 1865: 3 col 5.

☞ CENTRE BRUNSWICK.——Editor Times: It is very gratifying to the citizens of this town to note the improvements which have been made in the system of teaching in our common schools. Especially has this been the case with the inhabitants of District No. 5, (Centre Brunswick,) who witnessed on Thursday, the 26th inst., the closing exercises of their Summer school, taught by Miss Eliza A. McChesney. The day being too chilly for a grove gathering, the hall of the old Snyder House, now occupied by Moses File, was freely offered, and well filled. The audience was interested and delighted for at least five hours with recitations, readings, declamations and dialogues, which evinced great application. The conduct of the children as well as their exercises, showed that they loved their teacher and that she had inspired them with love for their studies. A fine dinner was served up for all who were present, and the performance closed with the presentation of a beautiful portfolio to the teacher by the children; the distribution of presents to the children by the teacher, and the solemn parting scene, which brought tears to the eyes of all present. Yours truly,
LOUIS N. BOUDRYE.
Troy Times. October 5, 1867: 3.

☞ NEW DIVISION OF THE SONS OF TEMPERANCE.—Deputy Grand Worthy Patriarchs Mullin and MacMillen will institute a new Division of the Order of Sons of Temperance at Centre Brunswick this evening. The embryo organization numbers forty members.
Troy Daily Times. March 11, 1870: col 3.

Death of an Estimable Lady—A Venerable and Notable Couple—Nearly 62 Years of Married Life.
An Eagle Mills correspondent writes:
The community received an unexpected shock last Saturday morning by the announcement of the death of Mrs. Hannah B. Ensign, wife of Henry Ensign. Born in this county in 1800 (with the maiden name of Berringer), the deceased was married at the age of 19 years to Henry Ensign, a native of Dalton, Berkshire county, Mass. All their worldly goods consisted of the money which Mr. Ensign had earned as a teacher of the district school in Millville [Eagle Mills] for a period of seven years. The young couple began their married life by working land for a part of the proceeds for four years. Mr. E. then purchased the De La Mater property at Poestenkill and kept a public house for three years. The family then consisted of five persons, including three children. Mr. Ensign purchased the farm in Brunswick where he now resides, and where by untiring industry and prudent investments he has become one of the most successful farmers and probably the wealthiest resident of the town. He is still active at the age of 86, and performs manual labor daily. Mrs. Ensign was an intelligent and entertaining conversationalist. Devoted to her family and her friends, it was a pleasure to her to offer to others the hospitalities of her home. Her funeral was held Monday in Gilead Lutheran church, conducted by her pastor, the Rev. T. K. Delo, assisted by the Rev. Mr. Smith of the Methodist church at Centre Brunswick. The reverend gentleman took his text from Job v., 26. The sermon was well adapted to the occasion, and the concluding remarks of the pastor to the family and friends were peculiarly felicitous.
Troy Times. November 10, 1881: 3.