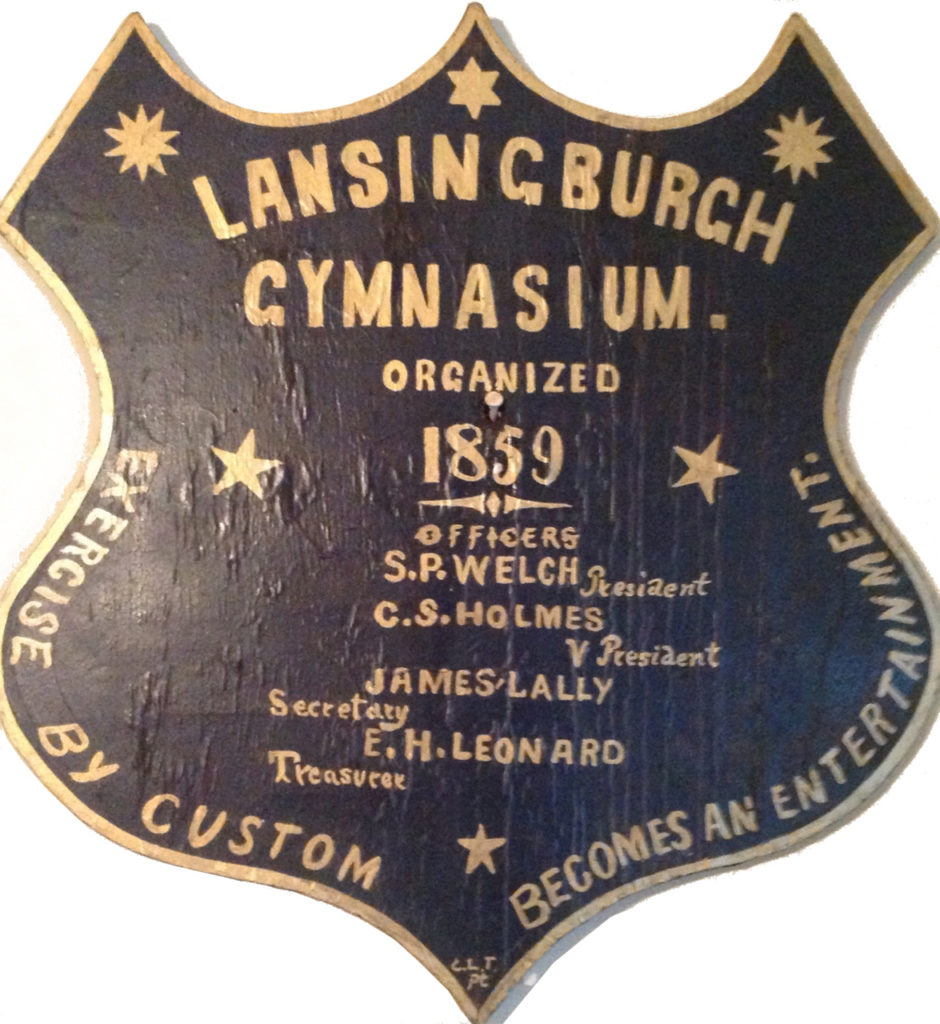 GYMNASIUM.—We understand there is to be a gymnasium room shortly to be opened, in the building on Richard Street, known as the “Olympic Saloon.” It is to be fitted up in the best style possible, with all the exercising poles, bars, &c., that can be thought of. Samuel King is to be the workman in fitting the room ready to receive all who are inclined to learn the arts of gymnasium, which is not only a pleasant, but a healthy exercise, for those who wish to join.
Lansingburgh Democrat. November 25, 1859: 1 col 2.

Gymnasium.
About forty of our citizens, young and old, have hired a room and are now engaged in fitting it up for the purpose of unbending themselves taking the slack out of their muscles. The idea is a good one, and the benefits to be derived incalculably great. Man is naturally a lazy animal, and unless he is quickened to exercise by some impulse derived either from the necessities of his position or his love of adventure, is very apt to settle down into an indifference to his physical wants, and become a prey to dyspepsia, mental, moral and physical. Our commercial and professional folks, fully alive to the necessities of doing something to keep from rusting out, have been put to it to find some healthy and vigorous exercise; some have taken to the road, and may be seen every morning quite early making a line for Troy or Speigletown; others, when in the season for it, amused themselves with cricket or base; now and then a row on the river, or a space of rolling-stones down hill afforded recreation. But a room furnished with springs, straps, weights, dumb-bells, &c., &c., where exercise may be obtained in all weathers, seems very desirable, and to this end the projected Gymnasium is considered just the thing. If a man has plenty of money and his taste runs that way, it is very well to keep a fast saddle horse, or a span of nags with a 2.20 gait, but as these blessings are vouchsafed to but few, the large body of predisposed melancholics must content their corporeal frames with vigor drawn from more humble sources. We have no doubt that if our valetudinarians will improve steadily and judiciously the advantages about to be offered, that great good will be accomplished. But there is one thing of vital importance to be remembered, and that is, the mind must participate in the recreations of the body or no advantage will be gained in health.
This is too much neglected—men take their cares and their perplexities into their recreations; they solve difficult problems for the successful prosecution of their business; they fret and agitate their nerves about real or imaginary difficulties while they are taking exercise, and thus find in a fair trial no good resulting from their recreation. To receive benefit the mind must leave all business matters [?] every name and nature behind and devote itself entirely and unreservedly to recuperation. In this way the balance between the mind and the body will be preserved and the exhausted, nervous, care-worn sufferer will soon feel a renewed elasticity. It is astonishing what an amount of endurance may be sustained under a carefully directed regimen.
Those who read of the wonderful feats performed by scientific pugilists or by those who have penetrated into the wilderness on exploring expeditions, or have journeyed into the Arctic Sea, have no doubt wondered at the sufferings and hardships which escaped with life, but there is no great wonder in all this if we regard the careful attention paid to diet—exercise—amusement, &c., &c. The whole thing is arranged on sound, philosophical principles and there is no reason why our young men should not be put through such a course of training; producing a race of men instead of a party of tobacco-using, bed-loving, empty headed imbeciles as many of them are. And why should not our females enjoy the benefits equally with males? Can anyone answer this question? Do they not need it in an eminent degree?
Lansingburgh Gazette. January 17, 1860: 2 col 7. [“Base” in the above “cricket or base” probably referred to baseball, though there was also a game called “Prisoner’s Base” that also was sometimes referred to just as base. See the article “Base (Prisoner’s Base)” at the Protoball wiki. (Thanks to John Thorn)]

☞ LANSINGBURGH.[…]
—Lansingburgh has a gymnasium almost completed, and the Gazette man promises when it is opened to carry off a barrel of flour, should one be put up for the exercise.
Troy Daily Times. January 23, 1860: 3 col 5.

[Communication.]
An Inquiry.
Certain members of the Young Men’s Christian Association of this village who have contributed of their funds toward the establishment and support of a general reading room, to be sustained under the auspices of the association, seeing that no practical result appears to follow from that contribution, are desirous to know what has become of the money.
It is now some three or four months since these subscriptions were solicited and paid. It is suggested that as the Gymnasium now established in the village appears to be an exclusive concern, and in that interest some part of their funds may have been diverted in that direction. Will somebody in the secret explain.
Lansingburgh Democrat. March 8, 1860: 2 col 3.

☞ ALBANY GYMNASIUM EXHIBITION.—A goodly party from this city and Lansingburgh went down to Albany last evening to witness the exhibition of the Gymnasium in that ancient town. The Troy Athletics were represented by Messrs. C. C. Schoonmaker, L. G. Benedict, E. F. Wait, B. D. Benson, J. H. Neher, W. H. Hegeman, G. H. Sagendorf, C. H. Meneely, E. Warner, G. F. Sims and O. E. Van Zile; the Press by J. S. Thorn, and the Lansingburgh Gymnasium, like that of Troy, by its Executive Committee—Geo. Forbes, Jas. Lally, E. H. Leonard, F. C. Olsaver. The party returned in the late Hudson River train.
The exhibition at Albany was highly creditable, and showed the increased advantages of a Gymnasium with a competent instructor like Prof. Montgomery. The feats performed and skill displayed were really wonderful.
The Trojans were treated in the most hospitable manner, and hope the visit will soon be repaid, when they have an exhibition of their own.
Troy Daily Whig. April 27, 1860: 3 col 4.

☞ GYMNASIUM.—We understand that Prof. Fields and several members of our Gymnasium, accepted the invitation extended them by Mr. Lally, Secretary of the Lansingburgh Gymnasium, to pay a visit on New Year’s Eve. They returned about 11½ o’clock, well pleased with the attention and politeness with which they were received.—We are glad to note the good feeling which exists between the Gymnasts of Lansingburgh, Albany and Troy.
Troy Daily Whig. January 3, 1861: 3 col 4.

☞ LANSINGBURGH.—The Gazette says that “the Gymnasium, after a short but noisy existence, has succumbed, and the apparatus has been sold, the rooms vacated, and quiet once more prevails in the neighborhood. Peace to its ashes.”
Troy Daily Whig. March 21, 1862: 3 col 4.