–Articles of incorporation of the Riverside club have been filed with the Secretary of State at Albany. The club is a social organization and is composed of well known gentlemen residing in Lansingburgh and Waterford. A suitable site will be purchased in the upper part of the ‘Burgh and a commodious club house erected at a cost of about $25,000. The following gentlemen are named as incorporators: F. B. Twining, J. A. Ide, C. L. Pine, C. F. Hartwell, G. H. Morrison, E. K. Betts, R. C. Haskell, Geo. A. Waters, Geo. W. Daw, E. Van Schoonhoven, Daniel F. Thompson, C. E. McMurray, Albert W. Powers, Thos. Breslin, R. H. Stubbs and Geo E. Holroyd.
Lansingburgh Courier. February 2, 1893: 4 col 3.

—The Riverside club has purchased of James H. Adams the desirable piece of ground on Second avenue, north of Mr. Waters’ residence, for $7,500. The lot has a frontage of 150 feet on Second avenue and extends back to the river. A handsome club house will be erected on the site.
Lansingburgh Courier. March 23, 1893: 3 col 1.

—The Riverside club house will be ready for occupancy in a few weeks, as work on the structure is being pushed rapidly forward.
Lansingburgh Courier. October 19, 1893: 3 col 2.

—The Riverside club will probably dedicate its handsome new building on Christmas day. It will be one of the finest and most conveniently arranged club houses in the State, and every resident of the ‘Burgh has reason to feel proud of it.
Lansingburgh Courier.October 26, 1893: 3 col 2.

—A card party will be held at the Riverside club house to-night. The directors of the club will also be perfecting plans for the erection of a bowling alley and carriage house. The bowling alley is to be built on the north side of the club house, and work will be started on it at once.
Lansingburgh Courier. March 15, 1894: 3 col 2.

—There will be a euchre party on the piazzas of the Riverside club Monday evening, and the prizes won at the last tournament will be distributed. […] —There will be a negligee dance at the Riverside club house to-morrow evening.
“Lansingburgh.” Troy Daily Times. July 5, 1895: 2 col 6. [“Negligee” meant something other than a sheer woman’s dressing gown at the time: a lightweight, summer men’s lounging shirt. It may have been another way of saying “no jacket required.”]

—Chairman R. F. Regester of the committee on bathhouse of the Riverside Club announces that the contract for the boat landing and bathhouse has been awarded, and that the construction will be pushed as rapidly as possible. It is expected to have the house complete by August 21.
“Lansingburgh.” Troy Daily Times. July 31, 1897: 4 col 2.

The Riverside Club’s Float.
The new float of the Riverside Club is now in position and will soon be ready for the use of the club members. It consists of a platform, 25×20 feet, supported upon forty barrels and capable of sustaining a weight of 14,00 pounds. The float is connected with the shore by a truss bridge and steps lead down from the upper terrace to the bridge. The committee in charge has decided not to proceed with the bath houses which the float is designed to carry until sufficient money is in hand to defray the additional expense. It is hoped that a sufficient fund will soon be forthcoming through subscription in order that bathing facilities may be enjoyed this season, but even as it now stands the float is a great addition to the club property and will be appreciated by the members.
Troy Daily Times. August 10, 1897: 4 col 3.

—Dancing will follow the “wargraph” entertainment at the Riverside Club to-night.
“Lansingburgh.” Troy Daily Times. January 12, 1899: 4 col 3. [Spanish-American “wargraph” films were so prevalent that for a time film projectors themselves became called wargraphs.] 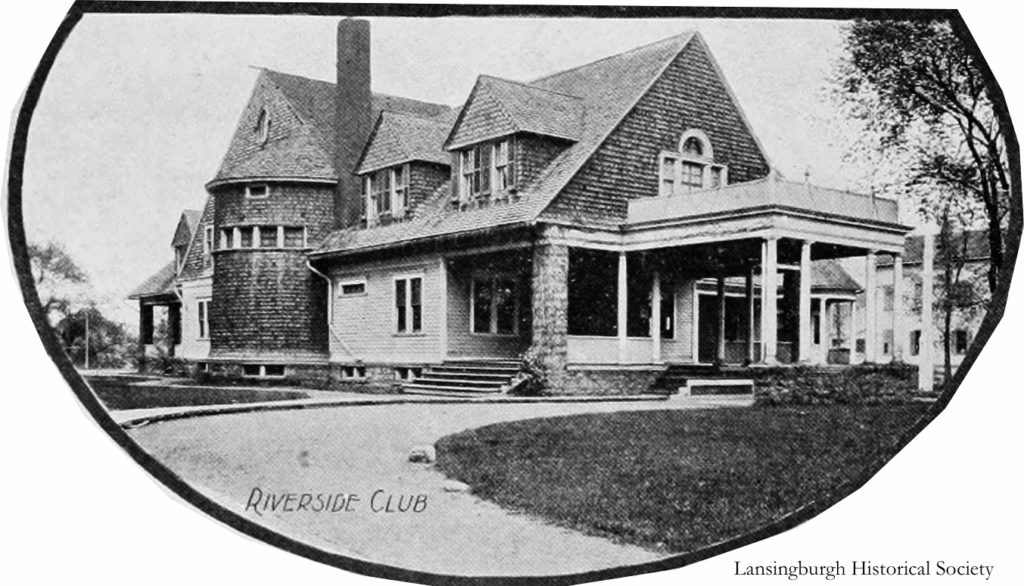 TO PURCHASE RIVERSIDE CLUB.
The New Riverside Club Company, Inc., through its attorneys, Mackrell & Ranney, filed a certificate of its incorporation in the Secretary of State’s office today. The incorporators are: Henry C. Koerner, Charles C. Freihofer, William Hurd, Frank M. Baucus, Robert J. Lemmon, Duncan B. Kaye, Harold T. Mallary, John J. Mackrell, Wallace C. Puffer, C. Walter Ferguson, Charles Hibbald, George H. Van Arnam, Paul Graham, W. Harry Webster, Walter Groesbeck, Wilbur Caney and Lester F. Cole.
The purpose of the corporation is to develop and stimulate the New Riverside Club, located at 809 Second Avenue. The club has had a lease of the clubhouse and grounds for some years past, but now arrangements are being made for the acquisition of this property by purchase.
The Riverside Club, when organized, was one of the finest institutions of its kind in this section of the state, affording ample and unlimited opportunities for all kinds of social activities. Interest in the club waned until a few years ago, when the New Riverside Club was organized, since which time the organization has been very active.
At the present time its social activities are numerous and varied. The clubhouse and grounds, located on the bank of the Hudson, afford wonderful opportunities, of which it is intended to take advantage. It is proposed to develop inside as well as outside winter and summer activities, announcements with regard to which will be made at a later date.
Already the club has its present membership list filled, besides having a substantial waiting list. It is possible that the present limit on membership will be extended for a short period of time, but that will be determined upon later.
Troy Times. February 29, 1924: 5 col 5.
FREIHOFER BUYS RIVERSIDE CLUB FOR PROTECTION
—
Social Activities To Continue Until May at Least Pending Baking Company’s Decision on Property.
The Riverside Club at 869 Second Avenue, for many years the scene of varied social activities, today was purchased by Charles C. Freihofer, president of the Charles Freihofer Baking Company, Inc., at 126th Street and Second Avenue.
Mr. Freihofer, it was reported, intends to make only a few alterations in the building itself and social activities will continue as usual until May or perhaps longer. Since the building is on property adjoining the bakery, Mr. Freihofer made the purchase for his own protection, so that expansion, if he desires it, will be unhampered.
The club house, owned by the Riverside Club Inc, since 1924, has been leased to the Riverside Club, a social organization. The latter group will continue to rent the building from Mr. Freihofer. The purchase price was not revealed.
Times Record. February 1, 1936: 14 col 6.
Riverside Club Added.
The Continued success of the [Freihofer] firm made necessary an increase in administrative space.
Last year when the property adjoining the plant, formerly the Riverside Club, was placed on the market, it was purchased by the concern.
Since that time the quarters have been remodeled to serve as the main office of the company.
“Good Hunch Proved Basis for Success of Charles Freihofer Baking Co.” Times Record. October 18 1937: 6 cols 1-2.
Riverside Club Has First Dance
—
The new Riverside Club had the first party of the season last night in the Willow Tea Room, where refreshments were served after dancing.
Current officers are Alfred Millhouse, president; Henry Miller, vice president; Henry Smith, secretary, and Henry Schuldt, jr., teeasurer.
Woman’s auxiliary officers are Mrs. Henry Schudt, jr., president; Mrs. Harry Webster, vice president; Mrs. William E. Murphy, secretary, and Mrs. Ray B. Sherman, treasurer.
The next get-together will be Nov. 18.
Times Record. October 29, 1937: 22 col 8.
MILLHOUSE RENAMED BY RIVERSIDE CLUB
Alfred J. Millhouse was reelected president of the Riverside Club last night at the annual meeting in the Willow Tea Room. The meeting was also the monthly dance of the club.
Other officers, all renamed, are Henry Miller, vice president; Raymond P. Weitzel, secretary, and Henry Schuldt, jr., treasurer.
Times Record. April 29, 1938: 28 col 4.