Lansingburgh.
Our enterprising townsman, Thomas R. Clark, is to convert the brick building in the rear of his restaurant on State street into a confectionary establishment, for the manufacture of all kinds and styles of candies. Why should not ‘Burghers, and especially the feminine portion thereof, be celebrated for their sweetness, with a half dozen candy factories in full operation, and another in prospect?….The committee appointed by the Board of Trustees to examine Mr. Bevan’s new village map and report, held a meeting last evening at the office of M. L. Fancher, Esq., when the map was subject to the scrutiny of the committee. Upon a careful examination it was pronounced correct and accepted. Several new streets at both extremities of the village are indicated upon the map. Thus is the “garden” stretching out its arms to embrace the villages of Harts Falls [Schaghticoke] on the north and Troy on the south. Van Schaick street [102nd Street] will run east and west through the southern part of the village. Hudson, Baxter, Lincoln, Hoffman [sic] and Elm [sic] streets will run east and west in the north part of the village. [Hudson, Wilson, Lincoln, Baxter, and Dickson streets would have become 131st, 130th, 129th, 128th, and 127th streets, respectively] Walnut and Chestnut streets [9th and 10th streets] will run north and south east of East street [8th Street]….It seems that there is a class of men in this place who are habitually opposed to any improvement that will tend to either beautify or benefit the village, and will adopt any available means to hinder those who make an effort to carry into effect any project that will make this village a desirable place for capitalists. The question of a town hall has been discussed time and again for several years, but just so soon as a movement was made towards bringing the matter before the people in a proper manner, the old fogies would sing the old song of taxes, and question our ability to erect the building. It is evident that after reading the articles published in the WHIG some time since in reference to the increase in taxable property in the village during the past year, Mr. Powers thought the matter of our ability to build the proposed Town Hall at this time was now settled beyond a doubt. Consequently he procured the services of an architect at his personal expense, and directed him to draw the plan that is now on exhibition in the post-office. Probably for the purpose of directing the attention of the people from any one scheme, there are several petitions put in circulation in the village. Water works, a bridge, a steamer house, and a hook and ladder house are talked of. Now would it not be better to concentrate our full strength upon one enterprise of the magnitude of either of those now in contemplation, and then carry it through. Less talk gentlemen and more action…Trustee [Charles S.?] Holmes has been authorized by the Fire Committee of the village to have the plans of the proposed hook and ladder house drawn and present them at the next meeting of the Trustees….At the adjournment of the committee, a vote of thanks was tendered to Mr. Brown for the gentlemanly manner in which he had waited upon the committee during the several meetings of the committee. Mr. Brown has been in the village but a short time but through his gentlemanly bearing he has made numerous friends, and his departure will be regretted by all who have formed his acquaintance….Our citizens must not forget the concert under the auspices of Diamond Rock Temple of Honor, on Tuesday evening next. Every arrangement has been made for the success of the undertaking, and as the members of the order never do things by halves, we predict a pleasant time for all who attend.
Troy Daily Whig. February 7, 1872: 3 col 3. 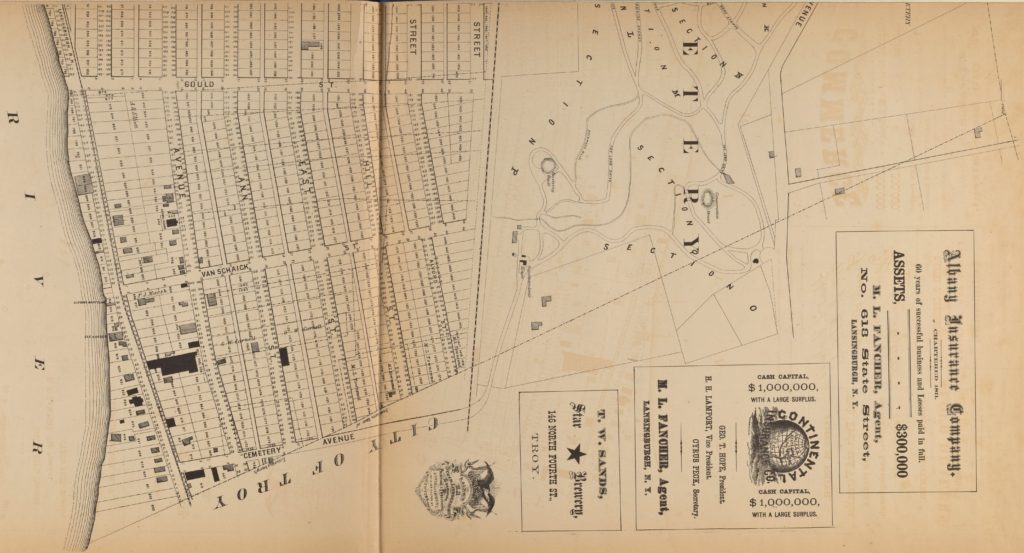