Mohawk Pines and Zoo was an amusement park at the former Powers Grove on the north end of Green Island, on the west side of the Hudson River roughly opposite from 101st to 103rd Street in the Village of Lansingburgh. Going by current street names, it was east of Dyke Avenue, north of Veterans Memorial Drive, and west of Cannon Street.

After the amusement park closed, it seems to have continued to be used as a picnic grounds. In 1923 Henry Ford built a plant on the north end of Green Island and made a portion of what had been Mohawk Pines into a public park. The name “Mohawk Pines” continued to be used sporadically, though “Ford Park” became far more common. Ford Park seems to have ceased to be in the late 1960s or early 1970s. 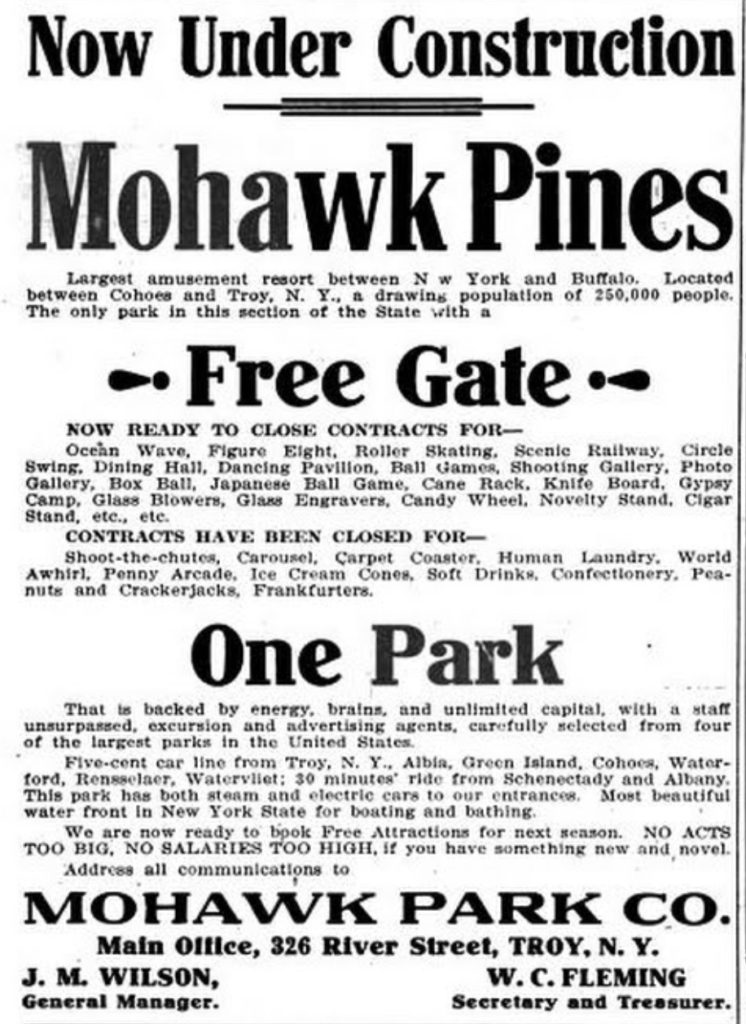 As soon as the Summer season opens a new park between Troy and Cohoes will be opened, and as it will draw from both cities Manager Wilson is expecting a big season. The park will be named Mohawk Pines.
“The Summer Amusement Parks.” New York Dramatic Mirror. May 9, 1909: 18 col 4. 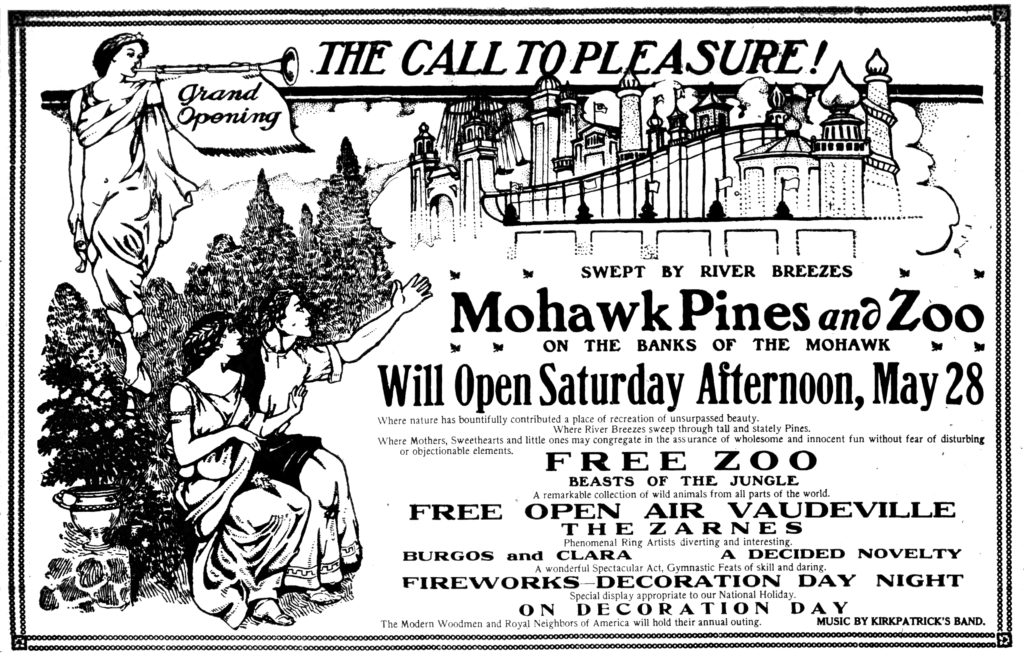 Grand Opening
THE CALL TO PLEASURE!
SWEPT BY RIVER BREEZES
Mohawk Pines and Zoo
ON THE BANKS OF THE MOHAWK
Will Open Saturday Afternoon, May 28
Where nature has bountifully contributed a place of recreation of unsurpassed beauty.
Where River Breezes sweep through tall and stately Pines.
Where Mothers, Sweethearts and little ones may congregate in the assurance of wholesome and innocent fun without fear of disturbing or objectionable elements.
FREE ZOO
BEASTS OF THE JUNGLE
A remarkable collection of wild animals from all parts of the world.
FREE OPEN AIR VAUDEVILLE
THE ZARNES
Phenomenal Ring Artists diverting and interesting.
BURGOS and CLARA A DECIDED NOVELTY
A wonderful Spectacular Act, Gymnastic Feats of skill and daring.
FIREWORKS—DECORATION DAY NIGHT
Special display appropriate to our National Holiday.
ON DECORATION DAY
The Modern Woodmen and Royal Neighbors of America will hold their annual outing. MUSIC BY KIRKPATRICK’S BAND.
Troy Times. May 28, 1910. [Image cropped and cleaned up from scan by Fultonhistory.com]

MOHAWK PINES TO BE PUBLIC PARK
When Henry Ford visited his Green Island plant some time ago he arranged plans for the remodeling of Mohawk Pines into a public park.This morning after a trip through the park, which will be thown open for public inspection July 21, it was found by a reporter that the richest man in the world had more than kept his promise to the public and his employees.
Among the improvements noted were [?] roadways for automobiles, [organization?] of several tennis [?] and tables, open [?] automobile parties, [?] and walks for pedestrians.
Times-Union. July 19, 1923: 1 col 6. [Digital scan of microfilm of newspaper too faint to read in parts] 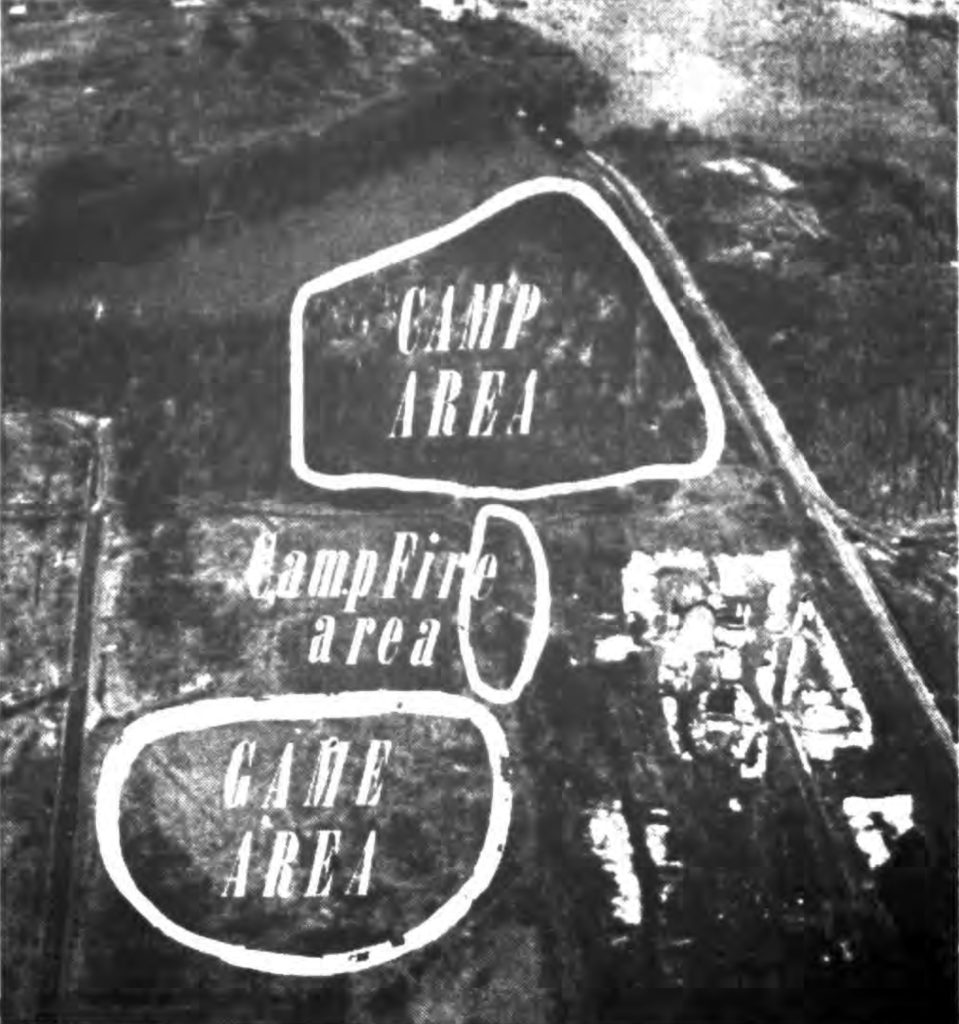 CAMP SITE—Ford Park on Green Island adjoining the Ford Motor Co. plant has become overgrown in recent years but now is being cleared again for a public grounds. The Ford company is furnishing the manpower. The park will be used during the coming weekend for the Uncle Sam Council Scout-O-Ree. More than 1,500 men and boys of the council will camp in the section outlined as the camp area. Public demonstrations will be given Saturday afternoon in the games area and a camp fire with historic scenes presented in the campfire area Saturday night. To the right of the picture are the buildings of the Ford Motor Co., and the Hudson River which can be seen at the upper right hand corner of the picture. Flowing into the Hudson is the lower branch of the Mohawk River. Ford Park once was called Mohawk Pines.
Times Record [Troy, NY]. May 19, 1954: 2. [Cropped from scan by fultonhistory.com]

Four-Block Hudson River Vista Proposed In Burgh
Urging the establishment of a Hudson River Vista to beautify and preserve the single unobstructed view of the Hudson River from Troy streets, the Lansingburgh Community Council has formally presented a resolution to that effect to individuals and agencies concerned.
The area proposed by the council extends along Second Avenue, four blocks, from about 800 feet south of 103rd Street to 107th Street, and from the Second Avenue westerly curb line to the low water mark on the river bank.
Letters signed by the council president, Benjamin M. Romp, accompanied copies of the resolution sent Sidney Smith, city manager; Thomas H. Brown, clerk to the Troy City Council; John Manning; clerk in the Rensselaer County Board of Supervisors, and to the Hudson River Valley Commission, state agency charged with improvement, cleanup and preservation of worthy values on mile-wide strips of land bordering the river.
In the resolution the council points out the concerns of all agencies with the Hudson River Valley Commission’s aims, and notes that the proposed Hudson River Vista is the only substantial area remaining where the public can view with ease from a highway the beauties of the Hudson. About a mile of the river can be seen, they indicate, including the confluence of the Mohawk with the Hudson and the wooded Ford Park at the northern end of Green Island. In addition a view of mountains to the south and west is available.
Only one private residence and three business establishments occupy portions of the area now, the council points out, and petitions all government agencies concerned to rezone the land strip to preclude more building there and to acquire title to existing buildings and have them removed.
Troy Record. June 21, 1968: 23.