Velocipede mania has somewhat abated, owing to an ordinance passed by the trustees, and the scarcity of money on the party of would-be velocipedists.
“Lansingburgh.” Troy Press. May 22, 1869: col 3.

Bicyclists and Bathers.
Samuel Bolton, jr., has recently had a number of benches erected on the river road for the use of bicyclists or strollers who wish to rest by the wayside. His latest philanthropic move is to have a place fitted up in rear of Bolton hall for bathers. Such acts as these are of frequent occurrence on Mr. Bolton’s part and are appreciated by the people.
“Lansingburgh.” Troy Daily Times. July 12, 1896: 4 col 2.
For Independence Day.
The bicycle road race will be held in the afternoon, the start being made at the corner of [One Hundred] Second street and Second avenue and proceeding over [One Hundred] Second street to Fifth avenue and around “the horseshoe” and finishing at Harlow’s road house. The prizes will be as follows: First prize, $50; second, $35; third, $15, and for time, $25. Fifteen smaller prizes, including bicycle suits, lamps, shoes and other articles, have been donated.
The participants in the race must be bona fide residents of Lansingburgh. Peter Smith was added to the list of solicitors. C. W. Witbeck was chosen grand marshal. Another meeting will be held next week to perfect arrangements.
Troy Daily Times. June 22, 1897: 4 col 3. [“The horseshoe” seems to have been the name for the intersection of the New Turnpike Road and the River Road.]
Bolton Hall,
LANSINGBURGH. 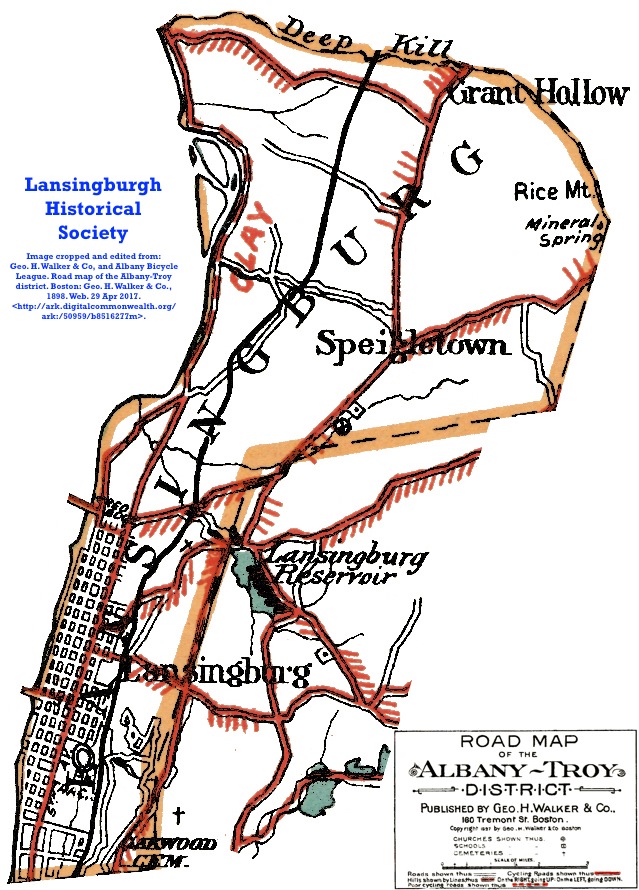