Roller Polo was an early form of floor hockey played on roller skates and enjoyed a fair amount of popularity in New York generally and Lansingburgh particularly at Bolton Hall from 1907-1912 or so. 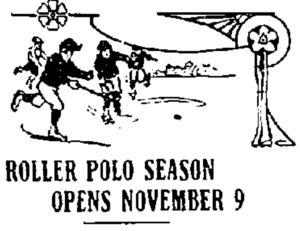 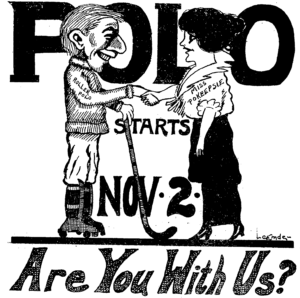 —The Troy roller polo five will play the Colonials this evening a return match on the Colonial court. A large crowd will undoubtedly be on hand to witness the popular sport.
“Local Paragraphs.” Amsterdam Evening Recorder. March 2, 1906: 8 col 2.

To Organize Polo League.
It is reported that a roller polo league will be organized in Central New York to embrace Amsterdam, Albany, Troy, Schenectady and Gloversville. Two representatives of the Gloversville roller skating rink attended the game at the Colonial last night, and stated that an effort was under way to organize a team at that place to play under the auspices of the rink management.
Amsterdam Evening Recorder. November 28, 1906: 5 col 2.
Colonials Win at Troy.
A large number of spectators was in attendance last evening at the roller polo game which was played at Bolton hall, Troy, between the crack Colonial team of Amsterdam and the local team. The visitors won by 4 to 2. The Amsterdam men showed excellent team work, while a number of splendid plays were made by members of the Troy team.
Amsterdam Evening Recorder and Daily Democrat. January 5, 1907: 1 col 6.

—Amsterdam was defeated last evening at Albany in the State Roller Polo League by Albany, 9 to 7. President Boothby said last night that the league will disband Saturday evening if the efforts to locate a team in Troy are unsuccessful. Manager Casey of Bolton Hall stated yesterday that it has been decided not to take up the roller polo enterprise, as it was believed roller polo would be injurious to the floor of the hall. In case the league is disbanded Albany and Amsterdam will play a series of games next week for the championship of the state and a side bet of $1,000.
“Among the Sportsmen.” Troy Times. December 22, 1908: 5 col 5.

An Interesting Game.
The game is extremely interesting to watch. Each team is composed of five players. The ball is set in the middle of the floor and at a signal from the referee both teams dash forward toward it. The first rush of each team tries to reach the ball first and pass it to the second rush, who advances toward the enemy’s goal. It is the duty of the centre to block the men coming down the floor toward his goal and keep the ball in the opposing side’s territory. The halfback plays much the same position as a cover-point in hockey. He acts as a goal defender by playing in front of the regular goal-tender, and when the ball comes down the floor he sends it back toward the opponents’ goal. The goal-tender seldom leaves his post in front of the nets. Special roller skates are used, and the halfback and goal-tender are well protected. The goal-tender wears shin and thigh guards, ankle guards, chest protector and mask. He wears skates so fastened to his feet that they can be slopped to one side, for when standing in front of the goal and out of the play he does not use skates. He can stop the ball with any part of his body. The halfback is not so heavily protected. The halfback is not so heavily protected. The ball is a little smaller than a baseball and is made of solid rubber. The sticks used are shorter than hockey sticks and more rounded at the ends. They are fastened to the players’ wrists. Three fouls takes off one point of the offending team’s score, and each goal counts one point.

Endeavors to Form Troy Team.
The management of the State Roller Polo League has been since last October endeavoring to place a team in Troy and use Bolton Hall for a rink. The management of the league agreed to pay all expenses and put down a temporary floor and be responsible for all wear on the hall. Satisfactory bonds were to be furnished, and the Troy Chamber of Commerce was interested in the cause. A prominent lawyer in Troy is also interested. When it came to the final permit to use the Troy hall the Troy manager decided that the game would injure the floor and would not pay. Union Hall, where the games are played in Albany, is a regular dance hall and is now used for that purpose. A dance is to be held there Saturday evening and in no way is the floor injured, as a preparation is placed on the boards before each game which leaves them in as good condition as ever. The league management still hopes to locate a team in Troy. There is a good field for the sport in this city, and many Trojans are interested in its cause. The matter will be brought to decided issue within a few days.
Troy Times. December 24, 1908: 10 col 2.

To-night at Bolton Hall the real roller polo season in this city will be inaugurated, when the five from Albany, leaders in the Empire State League, will meet the team representing Troy.
Troy Times. January 12, 1910: 9 col 3.

—The Troy and Albany teams of the State Roller Polo League will contest this evening at Bolton Hall. Although a new game to Trojans, roller polo has already gained many enthusiastic followers here. It fully deserves the popularity it has gained elsewhere and seems destined to secure in this city, for it is undoubtedly the fastest indoor game that has ever been devised. Troy is represented in the league by a very strong team, which has won the last two games it has played with Albany, the league leader.
“Amusements.” Troy Times. January 12, 1910: 2 col 4.

—To-night at Bolton Hall the real roller polo season in this city will be inaugurated, when the five from Albany, leaders in the Empire State League, will meet the team representing Troy. The Trojans have already defeated Albany twice. The local team since entering the race has lost but two games and has a team that is among the best in the league.”Among the Sportsmen.” Troy Times. January 12, 1910: 9 col 3.

Troy’s First Game.
The roller polo season will open in Troy to-night with Albany as the Trojans’ opponents at Bolton Hall. The league has endeavored to put a good team in this city and “Red” Rorty, considered the best referee in the Empire State League, will officiate. Before the game he will give a short explanation of how roller polo is played. The season at Schenectady will open to-night with a game between Schenectady and Amsterdam.
Troy Times. October 23, 1912: 11 col 3.
Amusements.
—At Bolton Hall this evening Troy and Hudson will play championship roller polo. The game, a new one here, has proved so exciting that each audience is larger than the one before it. After the game dancing is enjoyed to music by the Troy City Band.
Troy Times. November 8, 1912: 2 col 2.

Roller hockey or roller polo started in 1878 at the Denmark Roller Rink in London, England.
Roller Hockey at the National Museum of Roller Skating. http://www.rollerskatingmuseum.com/hockey.html