The Rev. Charles Townsend will move into his new residence on Second [sic?] avenue this week. Mr. Townsend’s domicile is one of the most elegant in Lansingburgh.
“Lansingburgh.” Troy Daily Times. November 22, 1886: 3 col 5.

Rev. and Mrs. Charles Townsend gave a reception to the congregation of the First Presbyterian church at their home on Third avenue last evening. Mr. Townsend was presented a purse of gold by members of the congregation.
“Lansingburgh.” Troy Daily Times. January 2, 1889: 3 col 4.

LANSINGBURGH.
—
Passing of Historic Landmark—Peebles Homestead Purchased By Andrew P. McKean […]
Andrew P. McKean has purchased from the estate of Mrs. A. A. Peebles the old Peebles homestead, the two-story frame dwelling that has stood at the southeast corner of Third Avenue and Fourteenth Street at least three-quarters of a century and probably many years more. It will soon disappear as a landmark, as Mr. McKean proposes either to sell the building with the condition that the purchaser moves it some other site or to demolish it. He resides in the beautiful residence about 100 feet south that was built by the late Charles Townsend, and by clearing the Peebles’ house from its site his own will be left standing in the midst of a magnificent lawn extending from the Fourteenth Street corner to a point quite a distance south of his domicile. Not long since Mr. McKean bought the Shelliday house that stood near his own and had it moved to a site in the eastern part of the village, thus enabling him to carry out his desire to have a spacious lawn. […]

A Handsome Home.
Mr. McKean is building an addition to his house and also intends to erect a large garage. When the improvements are completed he will have one of the handsomest houses in the Lansingburgh district.
Troy Times. July 19, 1915: 2 col 2. 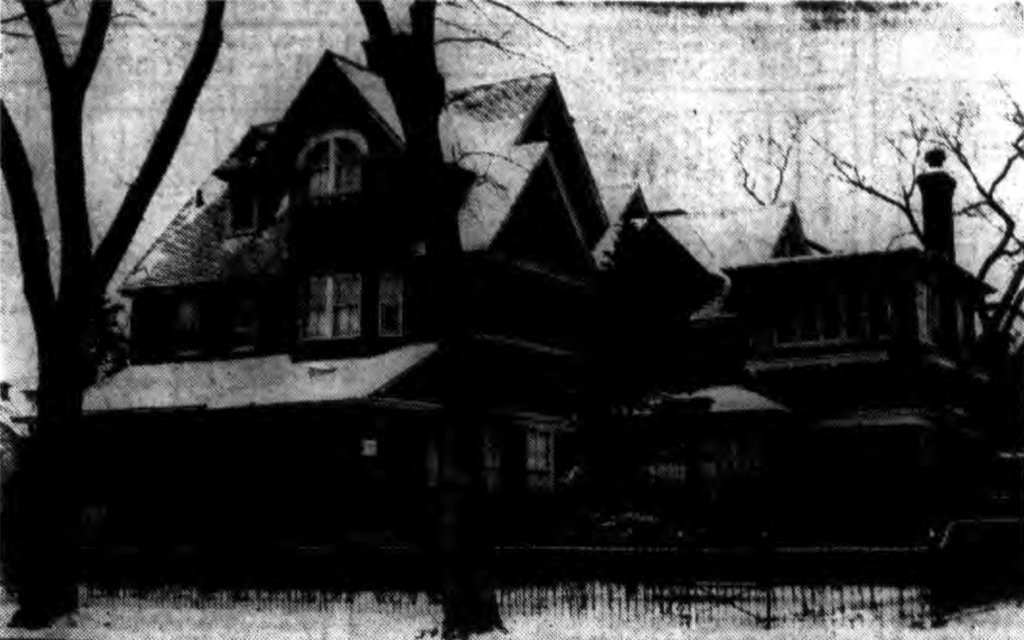 Leonard Hospital Purchases McKean Residence
The home of Mr. and Mrs. Andrew P. McKean, above, at the southeast corner of 114th Street and Third Avenue, is being purchased by the Leonard Hospital for living quarters for members of the hospital staff. The property occupies approximately a half block on Third Avenue from 114th to 113th Streets and is 120 feet deep. Practically no alterations will be required for its new purpose, President Frank B. Twining of the hospital board has announced.
Times Record. January 6, 1939: 15 cols 3-5. (Cropped from scan by Fultonhistory.com) 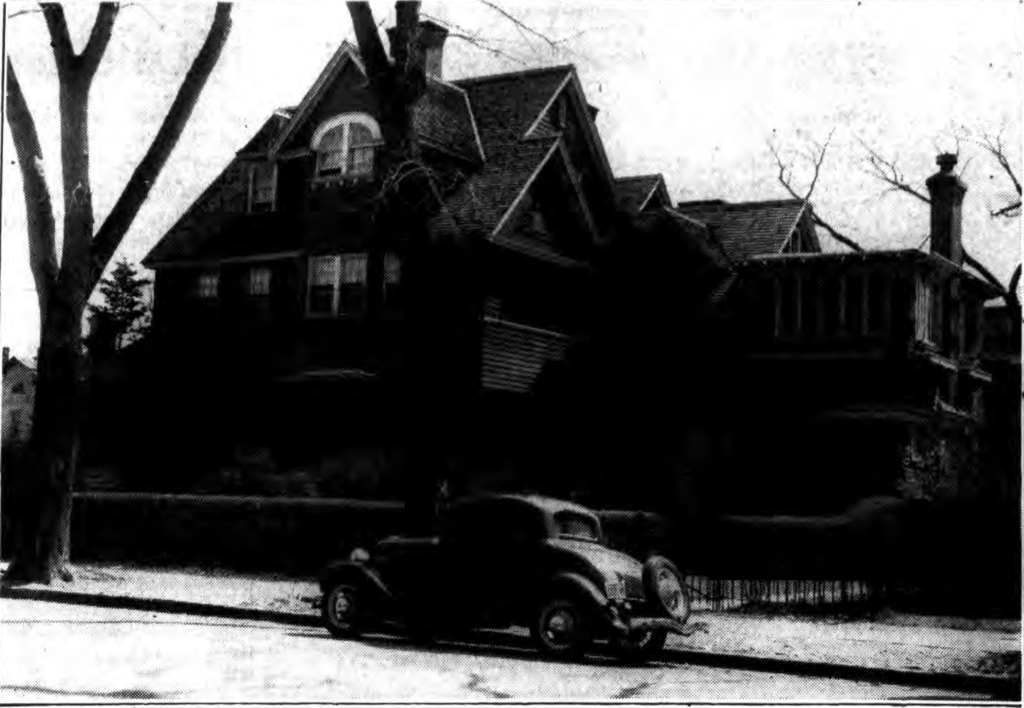 Leonard Hospital Staff Nurses’ New Residence
This is the new staff nurses’ residence of the Leonard Hospital at 532 Third Avenue. The beautiful home was formerly occupied for many years by Mr. and Mrs. Andrew P. McKean but was purchased recently by the hospital. Wide lawns surround the house and there are several flower gardens. The nurses have the use of three living rooms on the ground floor. The house recently was redecorated by a well known firm.
Times Record. May 9, 1939: 10 cols 2-5. (Cropped from scan by Fultonhistory.com)

LEONARD HOSPITAL PLANS TO ACQUIRE M’KEAN PROPERTY
—
Staff To Be Housed in 114th Street Building, Board of Managers Decide.
The Board of Managers of the Leonard Hospital, meeting yesterday afternoon at the hospital, authorized Frank B. Twining, president, to negotiate the purchase of the McKean residence at the southeast corner of 114th Street and Third Avenue. The purchase price was not divulged.
Occupancy of the building, which will be used as living quarters for staff members of the hospital, is expected to take place within a week. The residence, long considered one of Lansingburgh’s show places, is owned by Mr. and Mrs. Andrew P. McKean of Troy and New York. Mr. McKean is a member of the board of managers.
It was decided by the board that the home will be known as the “McKean House for the Leonard Hospital Staff.”
By locating staff members in the new property, overcrowded conditions at the hospital nurses’ home at 113th Street and Sixth Avenue will be relieved, Mr. Twining said. General duty nurses will continue to be housed at the nurses home.
The property takes in approximately one-half the block on Third Avenue between 114th and 113th Streets, and is 120 feet deep. It includes a spacious and beautifully arranged garden in addition to the house which is in perfect condition and ready for occupancy without requiring a single change, Mr. Twining said.
A large living room, reception hall, dining room and kitchen are contained on the first floor. The second floor has four baths, eight bedrooms and a large, enclosed sleeping porch.
The late Rev. Charles Townsend, a Lansingburgh Presbyterian minister, constructed the original house on the corner lot. Later, when it became part of the McKean property, land to the south was purchased and the home was enlarged to its present size. Land purchased from the Peebles family years ago provided the space for the garden.
Included also on the site is large, heated garage having space for at least four automobiles.
Times Record. August 4, 1939: 11 col 1.
LEONARD HOSPITAL BUILDINGS RECEIVE INSULATION COAT
Mid-summer heat no longer will trouble patients at the Leonard Hospital. A new coating of protective insulation is being installed throughout the building.
Special attention is being devoted to the operating and delivery rooms and the third floor main X-ray quarters and children’s section.
The same treatment is to be given the staff nurses’ home at 113th Street and Sixth Avenue and the McKean Staff House at Third Avenue and 114th Street.
Times Record. August 9, 1940: 2 col 7.
Investigate Vandalism At Hospital
Ralph Betts, administrator of Leonard Hospital, reported to Troy police today of malicious mischief at the hospital’s staff house, 532 3rd Ave.
Police said that about four dozen shingles had been torn from a garage roof of the staff house and that panes of glass in a garage door had been broken.
The report also shows that lattice work on the outside of the garage, which the vandals had climbed, had been broken.
The unknown vandals used the lattice work to climb onto the roof, authorities said.
There was no immediate estimate of damage, according to hospital spokesmen.
Times Record. October 12, 1967: 19 col 6.
Fire Extinguished
Troy firemen used a booster to extinguish a small blaze under a porch at 532 2nd Ave. Monday night. Slight damage was done to the porch of the structure which is owned by Leonard Hospital.
Times Record. May 23, 1972: 24 col 2. 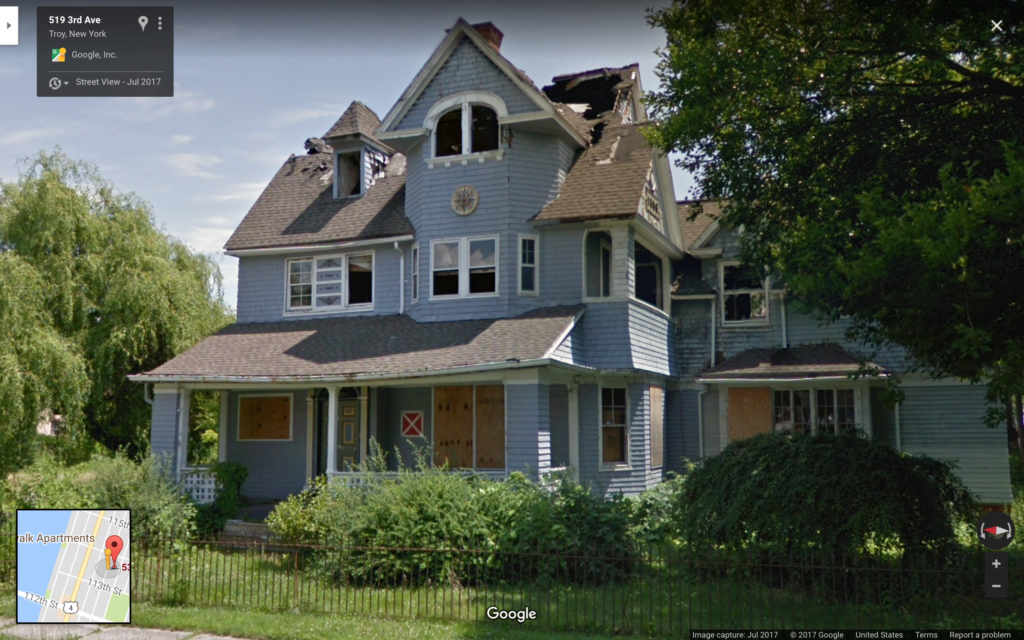 532 3rd Avenue. Google Street View. July 2017. (Google Street View addresses don’t always display properly, particularly if view of property is made at an angle. The red square with a white cross sign on the house is used to mark damaged vacant properties, ostensibly to warn firefighters.)