Oaklands, or Oakland, was the Judge George Gould family home around what is now 188 Seventh Avenue, and approximately thirty acres surrounding it, previously a summer home of George Vail. Burleigh’s bird’s-eye lithograph “Lansingburgh, N. Y., Fourth Ward 1st Street to 9th Street” from 1891 shows the home approached by a private driveway wandering into the wooded grounds from the northeast corner of 103rd Street and Fifth Avenue, the latter previously named Vail Avenue or Whipple Avenue. The avenues and streets around the Gould home on various maps prior to 1900 in many cases appear to have been projected rather than actually existing at the time. 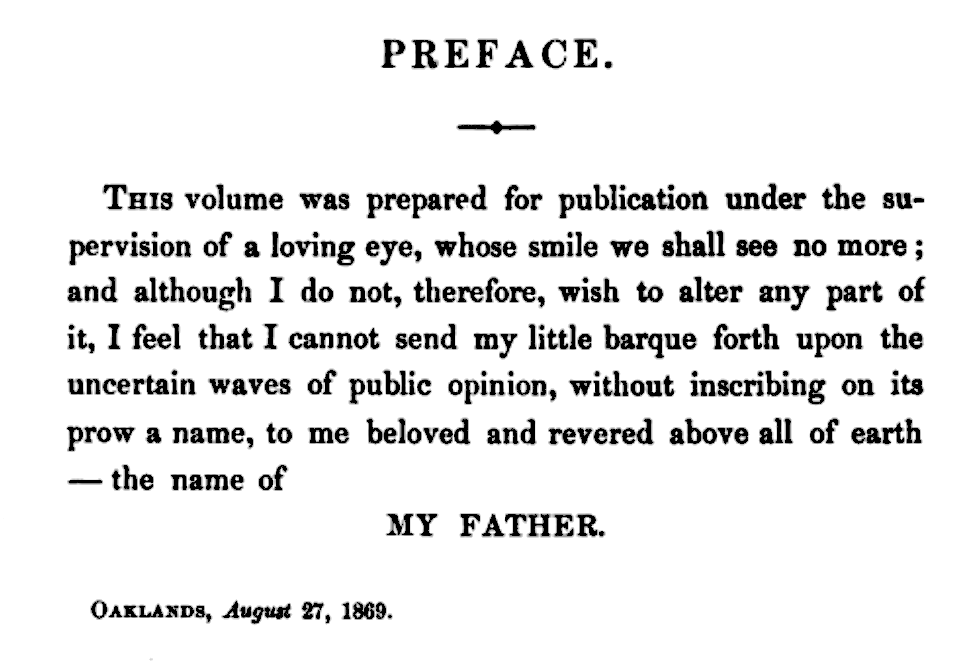 —The children of the Troy orphan asylum are enjoying a picnic this afternoon at Oaklands, Mrs. Judge Gould’s residence, on Vail avenue. The Troy and Lansingburgh street railroad company provided free transportation for the little ones.
“City Notes.” Troy Daily Times. July 27, 1882: 3 col 1.

—Mrs. Col. Coppinger, daughter of Secretary Blaine, who died yesterday at her father’s house in Washington, was a guest at the home of Mrs. Judge Gould last summer, where by her affability and kindness she made many friends in this city.
“Obituary.” Troy Daily Times. February 3, 1890: col 6.

—The children of the Troy orphan asylum are enjoying this afternoon the hospitality of Mrs. Judge Gould at her residence at “Oaklands.” Refreshments and music are included in the program.
“City Notes.” Troy Daily Times. June 26, 1890: col 2. 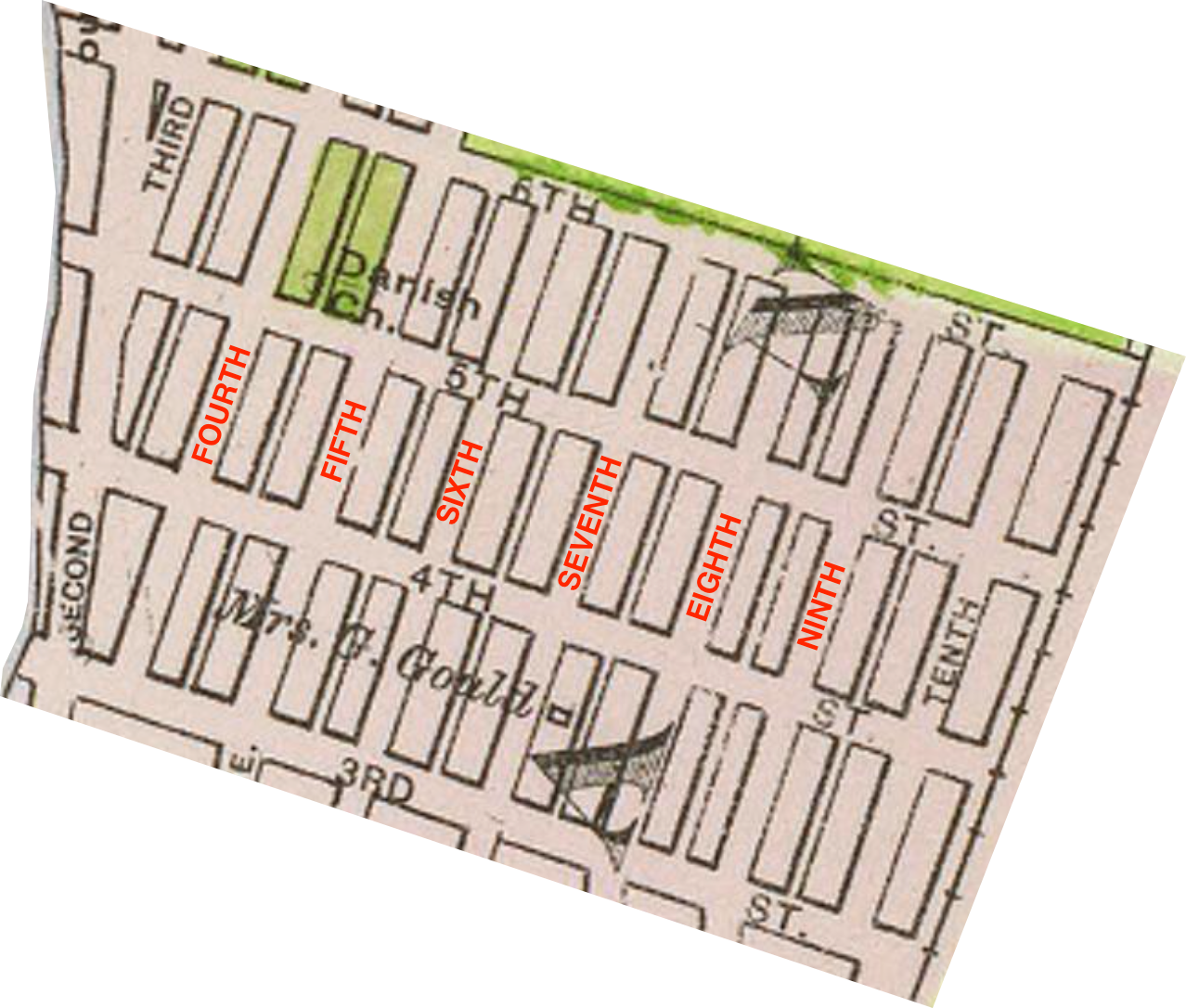 He Is Not Missing—A Florist’s Vindication.
The following associated press dispatch from Springfield, Mass., was published in Saturday’s Times:
Christian Jagd, a member of a Danish royal family and a florist in Springfield, Mass., is missing. His partner, Henry C. Henking, charges him with swindling to the extent of $600. His father belongs to the king’s court, being secretary of the treasury of Denmark.
Mr. Jagd, who is apparently an estimable man, visited the Times office to-day to deny the statement contained in the above dispatch. He has been in charge of the grapery and greenhouses at Mrs. Gould’s, Oaklands, in Lansingburgh, for three weeks, having gone to that place from Springfield, and his whereabouts being known to his former partner, Mr. Henking. Mr. Jagd shows certificates which sufficiently vouch for his character, and also a document signed by Mr. Henking at the time of dissolution of partnership between them, releasing Mr. Jagd from all liability in connection with the firm and agreeing to give him in the spring of 1893 plants of value to the amount of $75. Mr. Jagd says he cannot imagine how the story originated, as the dissolution of partnership between himself and Mr. Henking was regular in every respect, and resulted, as the document in his possession shows, in an agreement by Mr. Henking which placed the obligation upon the latter and not upon Mr. Jagd.
Troy Daily Times. October 7, 1892: 2 col 5.
A Wedding That Recalls Famous Ancestry.
The marriage of Miss Mary Ross Wilson of Washington, D. C., to Tracy Gould of this city took place at Zion Episcopal church in Sandy Hill at 2 o’clock this afternoon. It was announced some time ago that the wedding would be celebrated this spring, and it was to take place in Washington about the same date, but the illness of Dr. Ross Wilson of Sandy Hill called Miss Wilson and her mother, Mrs. M. E. Wilson, north about two weeks ago and cause a change of the arrangements. The wedding was quiet, only a few of the immediate relatives of the bridge and groom being present. Immediately after the ceremony the bridge and groom left on the south-bound train for their wedding trip. The groom is well known in this vicinity as the only surviving son of the late Judge George Gould and Mrs. S. M. Gould of Oaklands, Troy. The bride is the only daughter of the late Hon. David Wilson of Albany, who was elected member of assembly in 1852 and refused the nomination for congress in 1854. He was of cultivated mind and great literary taste and ability and the author of several successful books of a historical and biographical character. He was as profoundly and widely loved and respected by his fellow citizens as was Judge Gould, father of the groom. The bride is a great-granddaughter of the late Hon. William Ross of Essex, whose name is held in grateful memory in his native county and who was noted for maintaining a magnificent scale of hospitality. Her great-grandfather was William Gilliland, who was known as “the patroon of northern New York” and who, as patentee of a tract of 60,000 acres, named Willsborough (now Essex), Elizabethtown and many other places in that neighborhood, which he founded and laid out, after different members of his family. The family is allied by marriage to the patroon of Albany, the Livingstons, the Gansevoorts, the Cuylers and to the late Hon. George Vail, grandfather of the groom.
Troy Daily Times. April 2, 1895: 3 col 5.
An Invitation Declined.
Mrs. Judge Gould, who invited the ladies of the President’s party to visit her residence at Oaklands, Lansingburgh, has received the following communication:
Hotel Champlain,
Clinton County, N. Y., Aug. 16, 1897.
Dear Madam:
Mrs. McKinley has requested me to acknowledge the receipt of your very cordial letter and to say that she has finally decided not to accompany the President to Troy. Thanking you sincerely in Mrs. McKinley’s behalf for your kind invitation and expressing her regret that she is not to have the pleasure of meeting you in Troy, believe me, dear madam, very respectfully yours, G. B. CORTELYOU,
Executive Clerk to the President.
Troy Daily Times. August 19, 1897: 3 col 5.

—The funeral of Mrs. Sarah McCoun Vail Gould, whose death occurred Sunday, will be held from her late residence, “Oaklands,” at the head of [One Hundred] Third street, Lansingburgh, to-morrow morning at 10:30 o’clock. Rev. Dr. Edgar A. Enos of St. Paul’s Church, of which the deceased was a member, will officiate. The bearers will be John I. Thompson, George T. Lane, A. C. Comstock, C. W. Tillinghast, Thomas Buckley and William Henry Warren. The interment will be in the George Vail mortuary at Oakwood cemetery.
“Obituary.” Troy Daily Times. August 29, 1899: 3 col 4.

TO RENT—Oaklands, Fifth Avenue and [One Hundred] Third Street, Lansingburgh, the residence of the late Mrs. S. M. Gould. House with all modern improvements; conservatory and green houses attached; good outbuildings; fine grounds; a large variety of fruit trees and flowers, with twenty-five acres of land; only fifteen minutes’ ride from the centre of the city. Apply to THOMAS E. NEWBOLD, on the premises, or W. W. ROUSSEAU, JR., 257 Broadway. 3-5-4t
“To Let.” Troy Daily Times. March 9, 1900: col 8.

—The Junior League of Hedding Methodist Church will hold a musical and literary social at “Oaklands,” formerly the old Gould property, on the evening of November 28.
—Edward O’Neil and William Riley have been awarded the contract for building catchbasins on the Gould property, recently purchased by Edward Murphy, 2d, and through which streets are being opened.
“Lansingburgh.” Troy Daily Times. November 21, 1900: 4 col 5.

—Complaint was made to Commissioner of Public Safety Coyle Saturday afternoon of a building moved from the Gould property at [One Hundred] Third Street and Fifth Avenue and allowed to stand on Fifth Avenue, near [One Hundred] Fifth Street. The Commissioner directed Captain Kirkpatrick to have it removed, and Officer Rowe was detailed. It was found that C. Augustus Roemer, who purchased the building is moving the building to his property on [One Hundred] Twenty-third Street. He had secured a permit from Commissioner of Public Works Phelan. He was directed to remove the building from the street as quickly as possible, as it is a menace to travel on the thoroughfare
“Upper Troy.” Troy Daily Times. January 14, 1901: 3 col 5.

—The house which was formerly the family residence of Mrs. Tracy Gould has been purchased from Edward Murphy, 2d, by contractor Walter Mott, who will move it to the corner of [One Hundred] Third Street and Sixth Avenue and will remodel it.
“Upper Troy.” Troy Daily Times. March 20, 1902: col 2.