There were a number of public fountains in the Village of Lansingburgh serving ornamental and/or refreshment purposes. The Village Green at 112th Street had one, and a number of others placed by the Woman’s Christian Temperance Union were located on streets throughout the village. One of the WCTU fountains survives, placed at the southeast corner of Powers Park where it is being used occasionally as a flower planter rather than as a fountain. 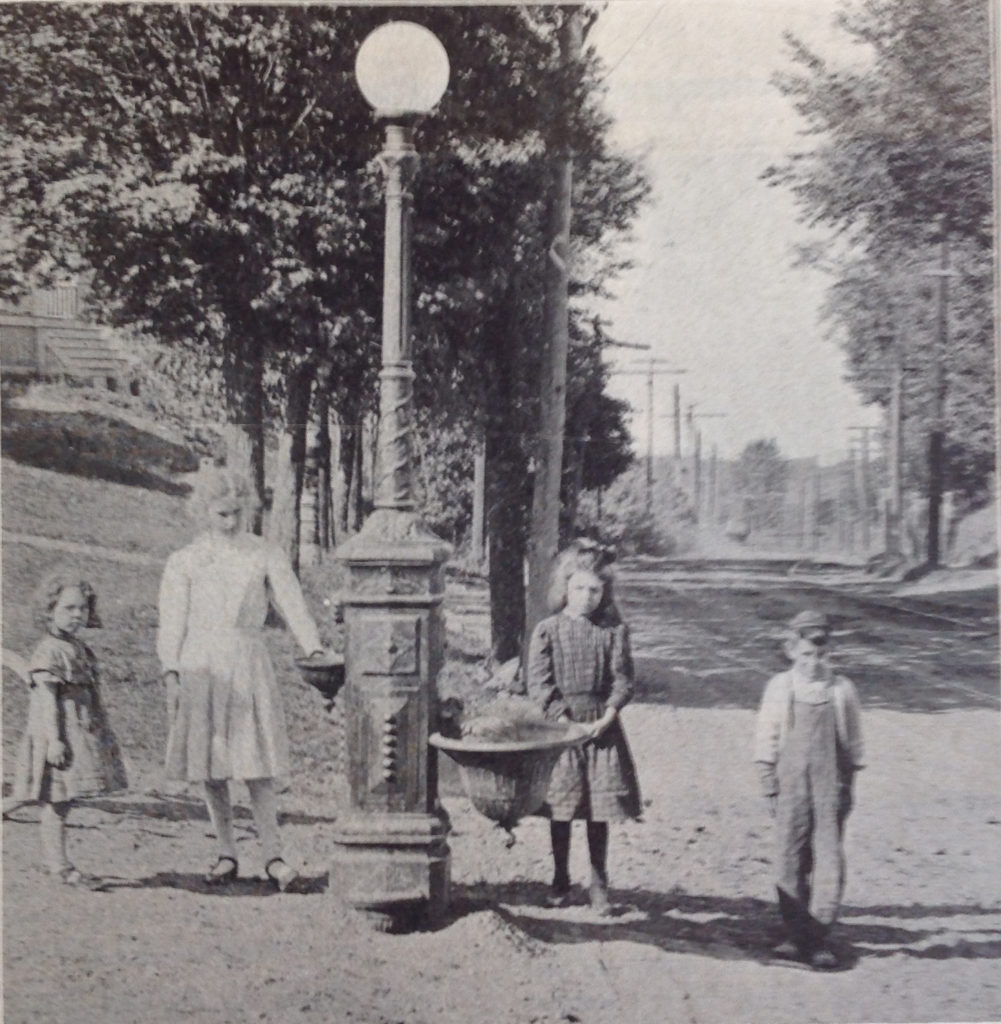 Example of a WCTU drinking fountain on Hoosick Street in Sycaway from 1909 Troy Times Art Section.

—A regular meeting of the Lansingburgh village trustees was held Monday night. […] In accordance with the report of the park committee it was decided to advertise for proposals for completing the park, including the placing of a fountain therein.
“Village Notes.” Lansingburgh Courier. May 16, 1885: 3 col 1.

—The village park has gone into winter quarters. The seats have been removed and the water has been turned off from the fountain. The plants and shrubbery are protected from winter blasts. The park is a beautiful breathing place and an honor to Lansingburgh.
“Lansingburgh.” Troy Daily Times. November 10, 1886: col 4.

A Public Drinking Fountain.
A committee consisting of Mrs. Sarah Gaston, Mrs. H. E. Bartlett, Mrs. C. C. Smith and Miss F. M. Parks, members of the Lansingburgh Women’s Christian Temperance Union, will appear before the Water Commissioners to-night and confer with the commissioners relative to the placing of a public drinking fountain in the village. The organization proposes to construct a fountain that will be a handsome ornament to the village and will cost about $150. The work of putting in the foundation will also be defrayed by the organization. The location has not been determined, but it has been suggested and considered that the fountain be placed on Fifth avenue near Rensselaer park.
Troy Daily Times. December 3, 1896: 4 col 4.
Before the Water Commissioners.
At the meeting of the Water Commissioners last night the report of Treasurer Lea for November was approved. […]
A committee composed of Mrs. John Gaston and Miss F. M. Parks, representing the Lansingburgh Woman’s Christian Temperance Union, appeared before the board relative to the establishment of a public drinking fountain. Two locations were suggested, one on Fifth avenue near Rensselaer park and the other at the junction of Second and Third avenues. A catalogue of designs for fountains was loaned the ladies and action on the matter was deferred. The commissioners stated that any assistance that they could give the union would be given.
“Lansingburgh.” Troy Daily Times. December 4, 1896: col 2.
LANSINGBURGH.
—
Public Drinking Fountain Arrives […]
—The public drinking fountain to be presented to the village by the Woman’s Christian Temperance Union has arrived and will be located on Fifth avenue, near [One Hundred] Third street, by Gray & Temple. The fountain, beside being serviceable, will be a handsome ornament in the thoroughfare. It is the intention of the union to have other fountains placed in the village as soon as possible.
Troy Daily Times. August 13, 1897: 4 col 2.

A committee consisting of Village President Skillman and Trustees Bolton and Roemer, was appointed with power to obtain and place in position cannon in the village park.
Bids were received for the painting of the fence about Powers Park and the fountain in the village park, and Trustee Green was empowered to investigate the bids and report at the next meeting.
“Lansingburgh.” Troy Daily Times. June 30, 1900: 4 col 4.

To the Honorable the Board of Alderman of Troy, N. Y.
The Woman’s Christian Temperance Union of North Troy wishes to call your attention to the drinking fountain which was erected by them at considerable expense and presented to the village of Lansingburgh some years since. After annexation to Troy the fountain was removed from the corner of Fifth Avenue and [One Hundred] Third Street and has never been reset.
Owing to the interest we as an organization have in this matter and having obtained permission to place it in a desirable location we therefore petition your honorable body to have the fountain properly placed and supplied with water at the city’s expense.
MRS. HENRY PHILIP,
Secretary.
MRS. ELLEN F. BASCOM,
President of W. C. T. U., North Troy,
April 2, 1902.
Received and filed.
Troy Daily Times. April 7, 1902: col 6.

It was announced that through the kindness of Crumby Bolton two new drinking cups had been placed on the Woman’s Christian Temperance Union drinking fountain on Third Avenue.
Troy Daily Times. April 2, 1902: 4 col 3.

—The granite drinking fountain which the Woman’s Christian Temperance Union presented to the city has been placed at the junction of Oil Mill Hill and Fifth Avenue. The fountain is a very handsome one and presents an attractive appearance. It will not be used for drinking purposes until spring.
“Lansingburgh.” Troy Times. November 21, 1908: 6 col 2.

—For some time the drinking fountain at the corner of [One Hundred] Seventeenth Street and Third Avenue has been dry, and many citizens, who have made this a stopping place to refresh themselves in their daily walks to and from work, regret their loss. The fountain was placed in position by the Woman’s Christian Temperance Union.
—The Woman’s Christian Temperance Union will have its annual outing Friday, August 10, when a trolley picnic will be enjoyed. The Anti-Cigarette League will be the guest of the union, and the ladies are requested to meet at 2 o’clock in Powers Opera House. Refreshments will be served, and an enjoyable time is expected.
“Lansingburgh.” Troy Daily Times. August 2, 1911: 4 col 3.

Fountain’s Decay.
The fountain at the corner of [One Hundred] Eleventh Street and Fifth Avenue, which was placed there several years ago by the Lansingburgh Women’s Christian Temperance Union, is in such condition that immediate repair is necessary if it is to continue in use. The little basins at the sides of the base intended for the use of dogs have long since been broken off by destructive boys, so that the water dribbles on the ground. The basin at the side for the use of horses is seldom cleaned, and the outlet becoming stopped with refuse thrown in by the children, who play about, overflows. The drinking cup, which is in use by the public, is one which was placed there a few days ago by John Flynn, the brush manufacturer, in front of whose shop the fountain is located. This is the third or fourth cup that he has placed on the chain, each of which has been stolen since the beginning of the summer. Mr. Flynn states that the city should either repair the fountain and place cups there or should abandon it altogether. The fountain is rusty and dilapidated in appearance. Physicians say that it is unhealthy to longer continue the use of drinking fountains that necessitate the use of cups. A prominent resident said this morning he thought the city should remove the old fountain and replace it with one of the bubbling variety, which would require no cup.
“Lansingburgh.” Troy Times. August 28, 1913: 13 col 4.
Fountain on Ground.
The fountain which was given to the city by the Lansingburgh Women’s Christian Temperance Union and which was erected on Fifth Avenue, south of [One Hundred] Eleventh Street, is lying this morning on the ground. This is the second time that such an occurrence has happened, and on the first occasion the fountain was repaired by the city. Mrs. H. Clay Bascom, Honorary President of the society, thinks that the city should again see to its re-erection and investigate.
“Lansingburgh.” Troy Times. October 1, 1914: 2 col 2.