Trouble with a capital T that rhymes with P that stands for… Pinball?

At least one pinball machine from Lansingburgh was destroyed with a sledgehammer in the Rensselaer County Court House in Troy, and multiple Burghers arrested and tried, part of a four decades-long campaign against the supposed ills the game promoted.

PIN BALL MACHINE OWNERS FIGHTING TO RETAIN DEVICES
—
Court Action Being Taken In Attempt To Prove Apparatus Not Slot Type; Nassau Case.
Owners and operators of “pin ball” machines were fighting on several fronts today to prevent police of the Troy Area from classing the apparatus as slot machines and thereby seizing them as illegal. […]
Some pay from a slot in the machine. Others have no obvious method of paying off. They are described as “skill machines” and to a certain extent this is true with some. Several different types are in play. On the various machines the number of balls given for five cents range from one to ten.
Times Record. July 20, 1938: 5 col 5.
SUITS TO RECOVER PINBALL MACHINES NOT YET STARTED
—
Rumors Fail to Materialize; Another Device Seized In South End
Although it had been stated more than two weeks ago that legal action was to be instituted to regain possession of some pin ball machines seized by officers of the district attorney’s office, this action had not been commenced up to today and now with four of these machines stored in the grand jury room, Dist. Atty. Earle J. Wiley states that he intends to have the machines destroyed.
The last pin ball machine was seized late yesterday afternoon at Allen’s Diner, 579 First Street, by Policeman Dominick Campana of the Central Station and Plainclothesman Kenneth Fake, the latter assigned to the county prosecutor’s office.
A call from the office of Chief of Police Frank B. Kendall was made to the district attorney’s office yesterday afternoon asking that one of the officers there accompany Policeman Campana for the seizure of the alleged gambling device.
No arrest was made at any of the seizures of the pin ball machines. The machine taken yesterday afternoon bears the notation of a distributor in Albany and District Attorney Wiley said today that he would request the proprietor of that concern to come to his office for interrogation.
Other pinball machines were seized as follows: Jan. 28, Terminal Tavern, 774 Pawling Avenue; Jan. 29, Arena Grill, 681 Burden Avenue and Jan 30, Shamrock Grill, 501 First Avenue.
The county prosecutor contends that the pin ball machines are gambling devices and as such may be destroyed by his office after the devices have been picked up.
Times Record [Troy, NY]. March 4, 1948: 23 col 8. 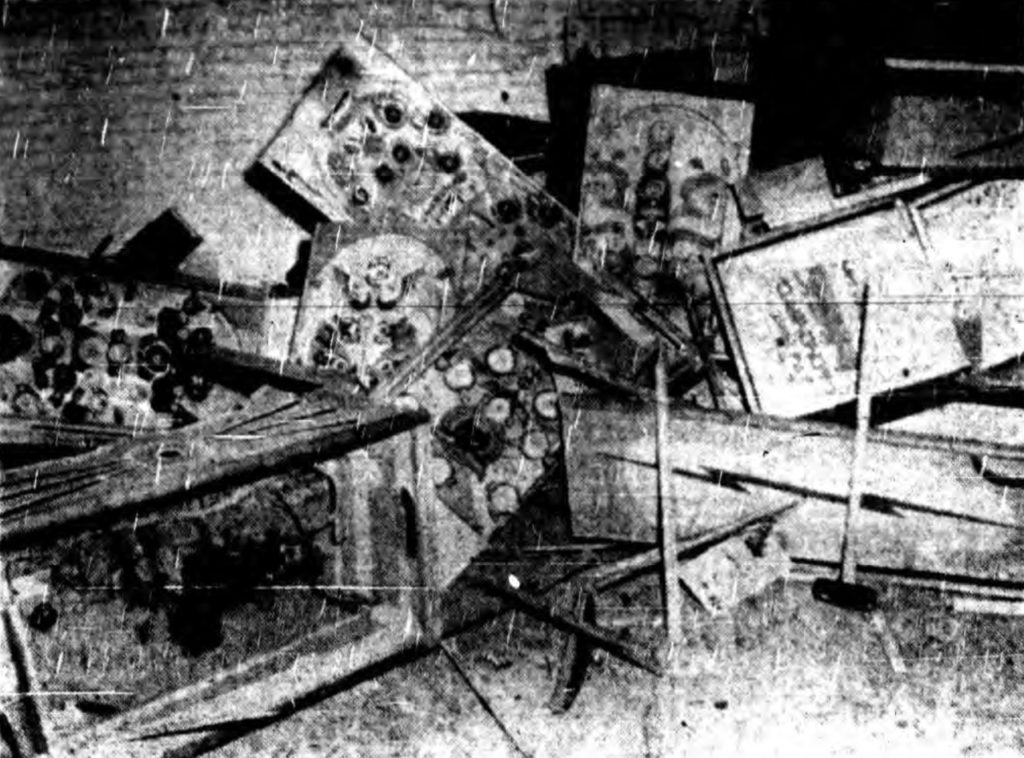 WAY OF THE TRANSGRESSOR—On the order of Dist. Atty. Earle J. Wiley, 11 pinball machines and a penny machine, seized some time ago by county prosecutor’s officers and deputy sheriffs, have been destroyed. Above is shown the largest of two piles of scrap to which the machines were reduced. This pile is in the basement at the Court House awaiting the junkman.
Times Record. May 29, 1948: 9 cols 3-5. [Cropped from scan by fultonhistory.com]

JURY SELECTED IN ACTION AGAINST STORE OPERATOR
—
Troy Man, William Lewis, Accused Of Possessing Gambling Device
The trial of William Lewis, operator of a store at 323 Fifth Avenue, on a charge of possessing a gambling device opened in Troy Police Court this afternoon, but not before difficulty was encountered in selecting a jury.
With Police Court Judge Thomas J. O’Connor presiding, the task of selecting a jury was started at 10 a.m. and was not completed until noon.
One of the obstacles to getting a six-member jury to hear the case was the case that at least a half dozen members of the panel of 19 testified they saw nothing wrong with pinball machines and one prospective juror said he had played pinball machines himself.
When the jury was finally completed with the selection of Frank B. Ward, there was only one more person left from the original panel of 19. Mr. Ward was accepted after he had been challenged for cause by Richard Coughlin, attorney for the defendant, Lewis.
Other members of the jury, in addition to Mr. Ward are Michael K. Keating, foreman; Raymond M. Palmer, Reba J. Whitman, Dorothea M. Hermann and Edward L. Gagen.
Both Mr. Coughlin, counsel for the defense, and the prosecution, represented by John T. Casey and Richard E. Bolton, assistant district attorneys, ysed all three peremptory challenges alloted them. The peremptory challenge is used to excuse a juror without giving a reason.
Lewis was arrested March 31. He was charged with possessing a pinball machine in his store.
Plainclothesman John Manning of the Troy Police Department was the arresting officer and complainant.
After a short recess following the swearing in of the jury, court was resumed at 12:20 with the defense and prosecution making their opening statements to the jury. After that a recess was taken until 2:30 p.m.
Times Record. May 4, 1951: 13 col 5.
PINBALL CASE TO BE TRIED JUNE 5 IN POLICE COURT.
—
Thomas J. Doyle, Store Owner, Charged With Possessing Gambling Devices.
Tuesday, June 5, has been set for the trial of Thomas J. Doyle, Troy store operator, on charges of possessing a gambling device.
Doyle will be tried in Troy Police Court before Police Justice Thomas J. O’Connor. He was arrested March 31 by Troy police and members of Dist. Atty. Timothy F. O’Brien’s staff on charges of having a pinball machine in the store he runs at 327 Fifth Avenue. […]
Times Record. May 28, 1951: 11 col 2. 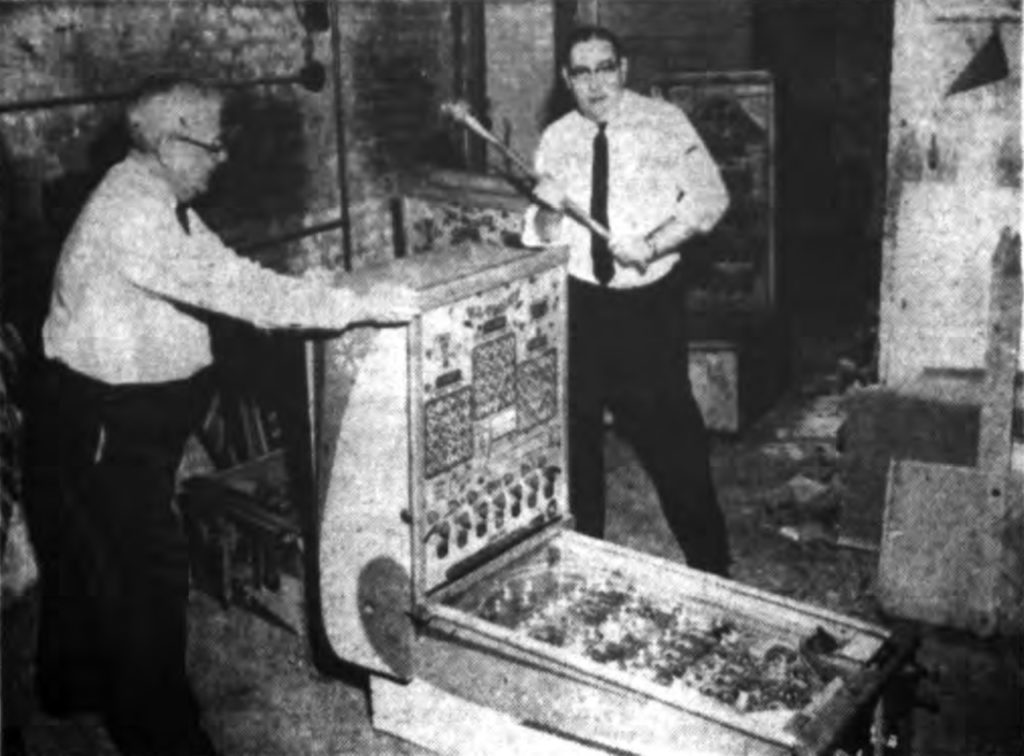 THE BIG SMASH—Three pinball machines, confiscated April 11 as illegal devices in use in several Troy stores, were destroyed yesterday in the basement of Rensselaer County Court House. Above, at the right, Deputy Sheriff Vincent McCarthy prepares to swing the destructive sledge hammer while, at the left, Edwin F. Livingstone, confidential investigator in the district attorney’s office, looks on.
Times Record. May 3, 1956: 10 cols 3-5. [Cropped from scan by fultonhistory.com]

Six Persons Freed In Report Submitted By Grand Jurors.
The Rensselaer County grand jury reported that it found no indictment against six persons after considering lower court charges against them. […]
included in the group were three county residents who had been arrested April 13 on charges of illegal possession of slot machines. […]


Pin Ball Case
The grand jury handed up a certificate to County Judge John T. Casey in which it said it found no indictment against Robert G. Jones, operator of a restaurant in Wynantskill; Dominic P. Perrela of Castleton, operator of a snack bar in East Greenbush, and Angelo F. DiNardo of 19 Hoosick St., Troy, operator of a restaurant in Wynantskill, where police confiscated pin ball machines which allegedly paid off with a free ball. In finding no indictment, the grand jury apparently found no evidence of criminal intent in that the machines were not owned or controlled by the persons arrested.
Times Record. October 5, 1967: 21 cols 7-8.