Lansingburgh has several cemeteries partly or entirely within its borders. The earliest of these began receiving burials in about 1771 when Lansingburgh was an independent village with a larger population than Troy. Troy annexed Lansingburgh in 1900. At about that time new burials in Lansingburgh were banned by the City of Troy.

Lansing Family Cemetery – This family burying ground had been near the present corner of 109th Street and Second Avenue, on the bank of the Hudson River. It contained the remains of Abraham Lansing who had been a founder and major land owner in Lansingburgh. His wife Catherine and other family members and servants had been buried in the same plot. The remains of Abraham and Catherine were later reinterred in the Oakwood Cemetery in about 1865. The Lansing Family Cemetery no longer exists.

Lansingburgh Village Burying Ground – This occupies the northeast corner at 107th Street and 3rd Avenue. It dates from the first Lansingburgh community in the 1770’s. It is currently the property of the City of Troy which does basic maintenance of the property. The Lansingburgh Historical Society has permission from the City of Troy to work at rehabilitating the cemetery and its stones, as part of a project promoted by NYS Senator Roy McDonald who hopes to secure money for continuing the cemetery’s improvement. Recent and past research indicates that there may be thirty-five Revolutionary War Patriots buried in this cemetery. Daughters and Sons of the American Revolution are helping to identify those buried so that the Patriots may be honored in the future. To date five War of 1812 soldier burials and eighteen US Civil War soldier burials have been identified in this cemetery.  Some graves have no stones, many existing stones are unreadable or broken and displaced. The Society will need to develop a plot map from what we know. No record of burials has been found but the Society is attempting to identify and catalog as many stones as possible in both the Village Burying Ground and the Old Catholic Burying Ground.

Church Yard of Trinity Episcopal Church – Adjacent to the Trinity Church at the corner of 115th Street and 4th Avenue this cemetery dates from about 1808. There are about 240 graves in this cemetery which include five graves of Revolutionary War Patriots and three graves of  US Civil War soldiers. Three deceased rectors of  Trinity Church are interred there. Members of several prominent early Lansingburgh families are buried here. No burials took place after 1900. Burial records are held by Trinity Church http://www.trinitychurchlansingburgh.org

Old Catholic Burying Ground – This is across 107th Street from the Lansingburgh Village Burying Ground at the southeast corner of the intersection. It began receivin g burials about 1829 on land purchased by Keating Rawson from Philander and Elizabeth Wells. Rawson deeded the cemetery to the Catholic Church of Lansingburgh which became St. John’s and later St. Augustine’s Church.  At present the Roman Catholic Diocese of Albany owns and maintains the cemetery. It is included in the rehabilitation project with the Village Burying Ground. One Civil War soldier gravestone has been identified but more research is required. It is believed that other Civil War soldier graves may have been placed in St John’s Cemetery. The last burials probably took place around 1900 when the local authorities banned burials in Lansingburgh. We are told that no burial records exist for this cemetery but the Society has a copy of a rough map created in the 1960s by Loretta Nial: west part and east part.

Oakwood Cemetery – This lovely example of the Victorian rural or garden cemetery movement lies along part of the eastern edge of Lansingburgh. Founded in 1848, it is a resting place for many prominent Troy and Lansingburgh people, including Sam Wilson, Troy meat packer during the War of 1812 who the US Congress has recognized as “Uncle Sam”; Jacob Lansing, founder of Lansingburgh; Jacob Vanderheyden, founder of Troy; Emma Willard, a leader in the education of women; Amos Eaton, founder of Rensselaer Polytechnic Institute; Russell Sage, prominent financier; several prominent shirt and collar manufacturing families, many of the local iron producers and foundry owners, and may others. This cemetery holds the remains of several veterans of the Mexican-American War, the US Civil War, Spanish American War, and the wars of the later 20th Century. This is an active cemetery with more than 60,000 graves. The Gardner Earl Memorial Chapel and Crematorium is a strikingly beautiful Romanesque building with Tiffany stained glass windows and imported marble and onyx interior. Oakwood is home to some of the finest specimen trees and shrubs in the northeast and is home for a wealth of wild birds. Learn more about Oakwood Cemetery from its website listed on our webpage. Information on the location of burials is available at the Troy Cemetery Association office just inside the Oakwood Cemetery entrance gate at the east end of 101st Street in Lansingburgh.

St. John’s Cemetery on the hill – This cemetery  began as the cemetery for St. John’s Church which became the present St. Augustine’s Church. It began receiving burials in about 1869. It has the graves of many of the Lansingburgh Roman Catholic community and is an active cemetery.  It has many graves of US Civil War, World War I, World War II, Korea and Vietnam. It sits on a lovely hillside overlooking Lansingburgh and the Hudson Valley. Burial records for this cemetery are held by the Roman Catholic Cemeteries Office located at the entrance of St. Agnes Cemetery in Menands, New York and may be available from St. Augustine’s parish office in Lansingburgh. The entrance to this cemetery is on Cemetery Road just south of the intersection of Cemetery Road and Gurley Avenue.

Other cemeteries in parts of adjacent municipalities that were once part of the Town of Lansingburgh or the Patent of Stone Arabia:

• Beam Family Cemetery – northeast of intersection of Liberty Road and North Lake Avenue, Town of Brunswick – thought to have been destroyed? 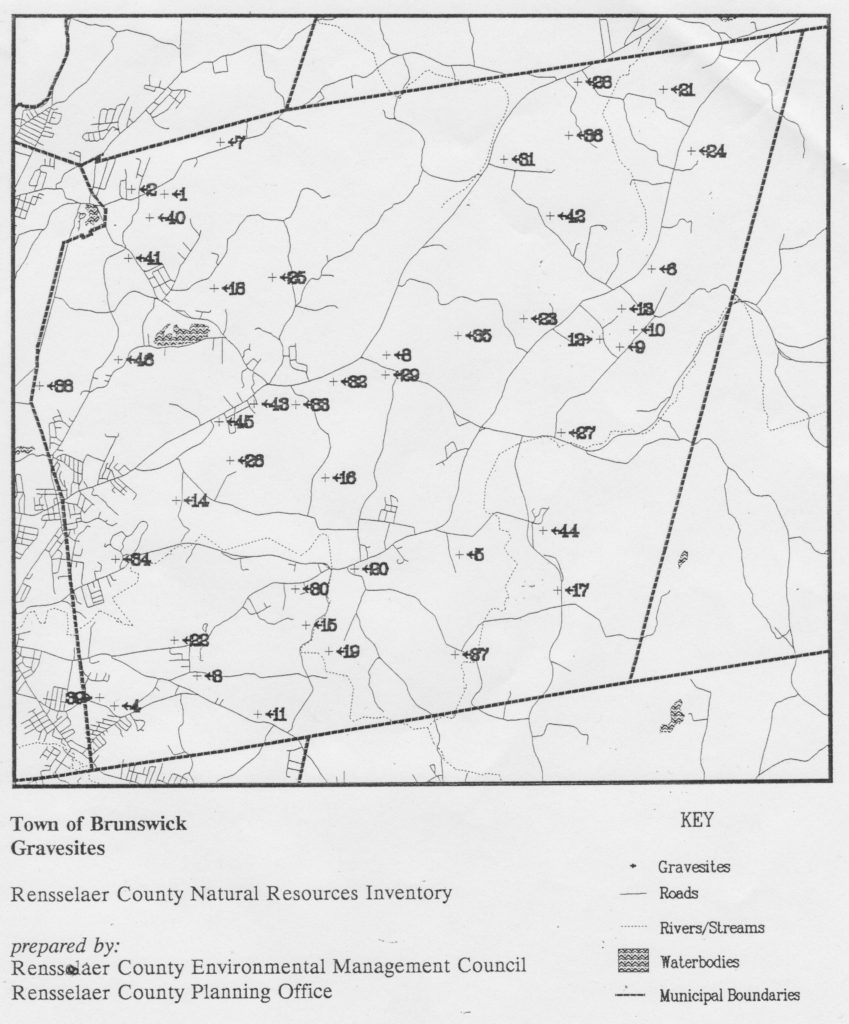 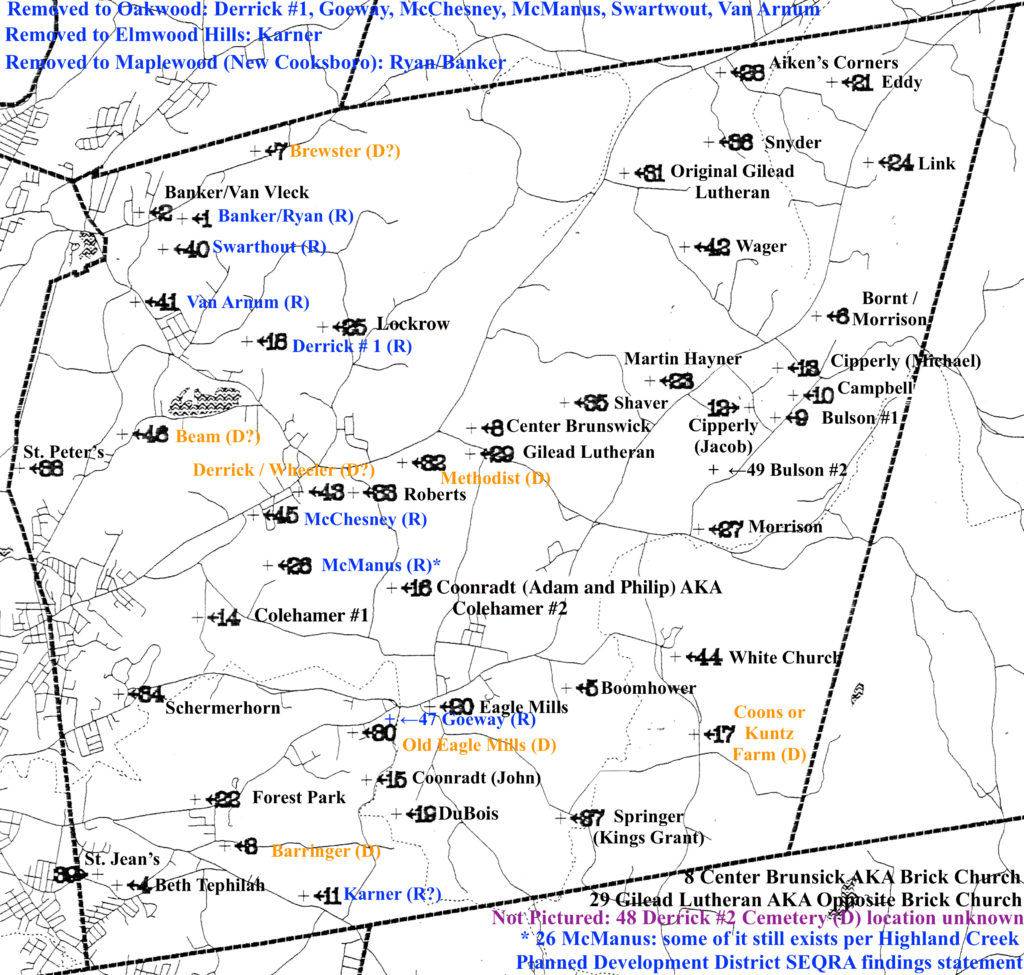